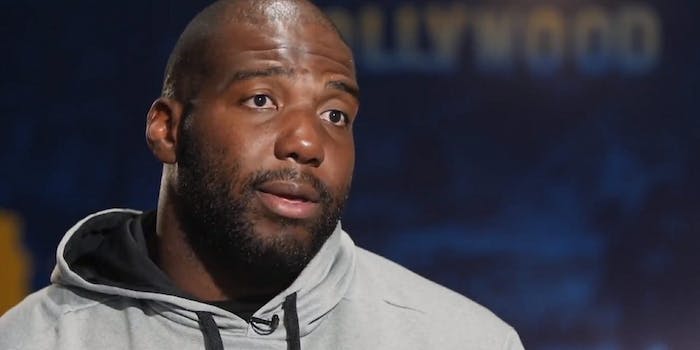 Meet Los Angeles Chargers offensive tackle Russell Okung. Alongside his lengthy career across some of the NFL’s best teams, Okung is going viral for telling the world about his alma mater—”Wakanda Tech.”

Okung gave a quick shout out to Black Panther’s East African nation during a roll call on NBC’s Sunday Night Football, where he introduced himself as if he really studied at “Wakanda Tech.”

For the uninitiated, football players regularly introduce themselves through roll call segments on TV. It’s an opportunity to put a face to a name for each team’s roster, plus it lets players give a quick shout out to their high school or college. Key & Peele famously parodied it years ago with progressively stranger names, like “X-Wing @ Aliciousness” and “Torque [Construction Noise] Lewith.”

Okung clearly took advantage of the opportunity for the better, and he made waves around the internet.

Did I just hear a professional football player say he went to “Wakanda Tech?”

Manager: Why don’t we all go around the room and say who you are and where you’re from?

Someone even changed Okung’s Wikipedia page to say he went to Wakanda Tech.

Y’all too quick with this 😂 Wakanda Tech pic.twitter.com/GMZBcDp3w7

Most of all, the internet gave Okung a proper Wakanda salute.

Black Panther remains a force to be reckoned with on the internet, thanks in part to the sheer memes that resulted from the film over the past year. It’s good to know Okung is happy to join in on the fun as the world learns more about the strange, wonderful nation of Wakanda.