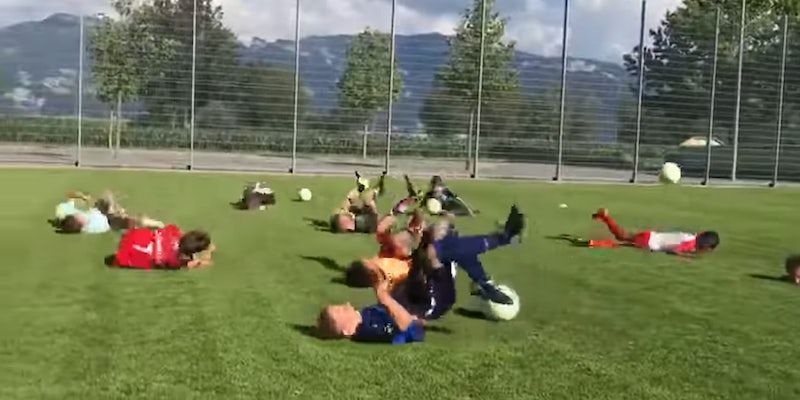 These young soccer players are nailing their Neymar impressions.

Brazilian soccer player Neymar Jr. is catching a lot of flak for what many see as outrageous flops and overacting during this year’s World Cup. After drawing an astounding ten fouls in Brazil’s 1-1 draw with Switzerland, the star forward became a meme after an over-the-top reaction to having his ankle stepped on during his team’s match with Mexico—a performance Mexican head coach Juan Carlos Osorio called “shameful.”

Neymar went to church and got some of that holy water. pic.twitter.com/XUNofyLGwI

Every athlete dreams of being an inspiration to a younger generation, but if a video posted to YouTube on July 4 is any indication, Neymar might be pushing things in the wrong direction.

The twenty-second clip, called “Practicing ‘The Neymar,'” shows a group of children running across a field dribbling soccer balls. When their coach suddenly yells “Neymar,” the kids to fall to the ground and start wailing and rolling around like they were dying.

It’s some pretty adorable satire, and YouTube seems to be loving it, as the video has already been watched over 275,000 times.

“Well, they need to roll more, and flail their arms around more too, they need more practice but they’re on the right track, keep it [sic] the training!” one person commented.

No word on whether or not all this mocking is getting to Neymar, but we’ll all have a chance to find out tomorrow when Brazil takes on Belgium in the quarterfinals.