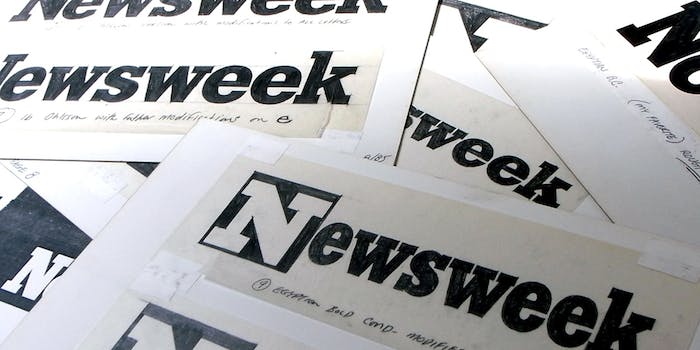 On the Internet, no one cares who you are. Just what you do.

When Newsweek ceased publishing their print edition at the end of 2012, ending an 80-year stint as a stalwart of the American news industry, it was largely seen as the first national casualty of the digital era, a titan felled by a climate wherein local newspapers are increasingly becoming a thing of the past. However, since Newsweek restarted printing earlier this year under new management, it took the Internet to bring the institution back to its former glory.

The cover story, ”Bitcoin’s Face,” which purported to have unmasked the creator of Bitcoin was a true bombshell, identifying the mysterious Satoshi Nakamoto as a quiet 64-year-old Japanese-American with a history in classified military programming and an affinity for model trains. Complete with a hyperbolic chase across Los Angeles, Newsweek had found a way to dominate the news cycle in astonishing fashion.

But why even bother to unmask the creator of Bitcoin? Whoever the creator is—Nakamoto has vehemently denied having even heard of Bitcoin before Newsweek approached him—the beast is out of the cage, unbeholden to its master.

Bitcoin is a decentralized currency, meaning it has no equivalent to the U.S. dollar’s controlled value by the Federal Reserve. Bitcoin’s value is largely determined by the value prospectors place on it, as well as the very nature of “mining” Bitcoin: The more Bitcoin that is mined, the harder it becomes to mine it. The harder it becomes to mine, the more scarce it is, thereby raising its value. Whoever designed the system, it’s a system that runs itself.

Of course, that would fit the profile of Nakamoto, who family members told Newsweek is a libertarian who values his privacy and rarely takes credit for his own accomplishments. “I could see my dad doing something brilliant and not accepting the greater effect of it,” said his daughter. “Any normal person would be all over it. But he’s not totally a normal person.” And, as the article’s author, Leah McGrath Goodman, points out, Nakamoto kept a correspondence with her until she asked about Bitcoin.

And that is all very intriguing, especially as Nakamoto lawyers up to prevent his name from being associated with the cryptocurrency, but why the obsession at all?

There exists a certain brand of journalism about the Internet, something I’ll call “Meet The Man Behind X” journalism: profiles of the people who’ve used the anonymity of the Internet to achieve fame for their accomplishments or inventions rather than themselves.

Ross Ulbricht, a.k.a. Dread Pirate Roberts, likely doubted he’d be profiled by Forbes for his part in creating the online illicit drug market Silk Road. Even though Silk Road, like Bitcoin, was largely a decentralized force created yet left untouched by Ulbricht, the media’s obsession with the unlikely kingpin certainly led to his arrest late last year.

A more benign example exists in the form of moot, supposedly named Christopher Poole, the founder and chief moderator of 4chan. Unlike Silk Road or Bitcoin, 4chan is largely still owned by Poole, yet his ability to regulate the image forum’s content or the (often unsavory) actions of its userbase have left him more in the role of a mascot than a true authoritative force (proven by his inability to turn a profit on the massively popular site). That didn’t stop media powerhouses like TIME magazine or the Wall Street Journal from unmasking the ineffectual then-20-year-old as if they’d found the man at the controls.

While such cheap narratives aren’t just lazy journalism (though they are), they miss one of the central conceits of Internet culture: No one gives a crap who you are, just what you do.

In the face of more and more of our own data making its way online (and not always at our will), the Web has seen a massive turn to more anonymous forms of Internet fame. Tumblr, Twitter, and Reddit all allow for easy popularity whilst retaining the wall between public and digital life. Internet users now sit in fear of being “doxxed,” where your personal information online is collected and attached to your actual identity. Some are even looking to rebuff such public forums as Facebook, resorting instead to “anti-social networks.”

At a time when celebrities on Instagram can make their ham sandwiches famous, it’s refreshing to see Internet culture at large cling to the idea of open results instead of the personality politics that have driven publications like Newsweek towards tabloid fodder. Not only does it seem Newsweek got the identity of Bitcoin’s creator wrong, it seems the publication missed the vital conceit of this central belief.

Newsweek went for what’s intriguing as opposed to what’s important.

Photo via Flickr/FontShop (CC BY 2.0)