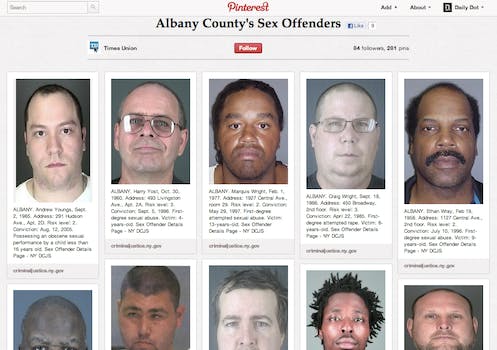 To help keep trick-or-treaters safe, the newspaper created photo galleries on Pinterest of Level 2 and Level 3 sex offenders that included their home addresses.

The sex offender galleries are divided among the four counties the newspaper covers: Albany, Rensselaer, Saratoga, and Schenectady. All of the pinned offenders’ information comes from the state’s sex offender registry.

In an announcement, the newspaper’s staff reports that it made the decision not to include Level 1 sex offenders because they aren’t considered to be as dangerous. There are more than 180 sex offenders per county.

The Times Union may be taking a cue from its southern neighbor. When a Pennsylvania newspaper, the Pottstown Mercury, began pinning criminal mugshots, arrests went up by 58 percent.

Brandie Kessler, the reporter who started the Pottstown mugshot board, said in an interview her Pinterest experiment has been successful in part due to the public’s participation. After all, there are more than 20 million people on the image-sharing network, and Pinterest’s commenting system gave the newspaper’s followers a chance to add to theirinformation.

“It’s also great to give the public an opportunity to help improve the quality of life in their community,” she said. “One thing I hear from the local police chiefs is there are only X amount of police officers on their respective forces, and they would love the community’s help in being more efficient. This board facilitates that. It’s also wonderfully interactive.”

Nobody has commented on the sex offender boards yet, but the Times Union’s Schenectady blogger, Sue Rock, didn’t mind the juxtaposition of grim mugshots among the usual shoes and clothing pins on her Pinterest page.

“Pinterest really is a single gal’s best friend,” she quipped.