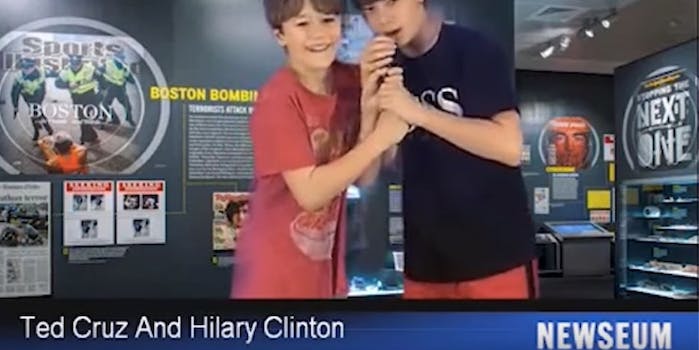 Do these Newseum visitors know their reporting clips are on YouTube?

It's an audition in front of the entire world.

For several years, Washington D.C.’s Newseum—it’s a news museum, get it?—has operated an installation that lets visitors get in front of a green screen and “deliver the news.” Hapless tourists may assume it’s just their friends watching, but, as comedy writer Sage Boggs pointed out this week, the videos are winding up on YouTube.

There's a museum in Washington D.C. called Newseum that lets anyone stand in front of a green screen & pretend like they're a reporter

Newseum News offers the full spectrum of weird stuff humans will do when presented with a camera and microphone. Some, like Dancin’ Ashley, are natural entertainers:

We are all Dancin Ashley pic.twitter.com/7adOSjAsL1

Others take the opportunity to own their friends:

Somebody give Tabitha & Jennifer a TV show stat pic.twitter.com/dLRjnl2SNz

Some don’t have any friends at all. (Bill, if you’re out there, we hope you’re okay.)

Bill didn’t know it at the time, but there’s at least one person who loves him.

I love you too, Boo Boo pic.twitter.com/3J8GywcuJS

At least some people try to take the news seriously:

Newseum Network News is a mirror on the best and worst of humanity, including our universal love for poops, butts, and tits. Each one of these is a perfect little treasure.

There are a ton of these on Boggs’ Twitter thread, and dozens more on YouTube. People have been posting underappreciated Newseum Network News compilations for years.

The Newseum is not unaware of this dorky phenomenon. Their social media people noticed Boggs’ tweets taking off, and sent him a polite response:

And that’s the news.