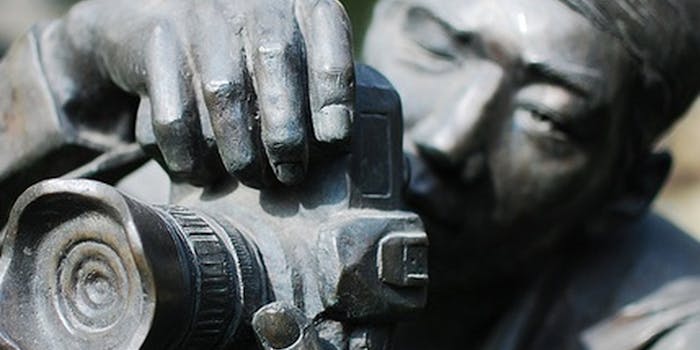 A judge in New York ruled that news agencies violated a photographer's copyright by using photos he shared on Twitter.

A U.S. judge ruled that two news outlets violated the copyright of a photographer by failing to obtain permission before they used photos he shared on Twitter.

According to the ruling, an Agence France-Presse (AFP) photography director discovered Daniel Morel’s photos taken following the 2010 Haiti earthquake after Morel posted the images to Twitter. The AFP claims it first saw the photos on the Twitter account of Lisandro Suero, who attempted to pass Morel’s work off as his own “exclusive photographs of the earthquakes.”

Reuters noted that the AFP distributed some of the images to photo agency Getty Images, after which The Washington Post published four of them on its website. The AFP argued it had the right to use images that appear on Twitter under that company’s Terms of Service (ToS), though District Judge Alison Nathan in Manhattan ruled that it did not have a license to publish the
photos without obtaining Morel’s permission.

Nathan partially granted Morel’s summary judgment motion, with other issues in the case to be decided at trial. However, the judge said AFP and Getty could be liable for statutory damages of up to $150,000 per infringer per image if they are found to have willfully infringed Morel’s copyright.

In his complaint, Morel had requested “tens or hundreds of millions of dollars,” based on restitution for each subscriber who used an image. Morel is also seeking damages for violations of the Digital Millennium Copyright Act.

The judge pointed out that while Twitter allows reposting (i.e. retweeting) or rebroadcasting of images under certain situations, it does not grant a license for commercial use. “Construing the Twitter TOS to provide an unrestrained, third-party license to remove content from Twitter and commercially license that content would be a gross expansion of the terms of the Twitter TOS,” the ruling stated.

Twitter, which has always strived to make clear that it is users who own their photos, was not a party in the case. In its ToS, Twitter states, “Twitter respects the intellectual property rights of others and expects users of the Services to do the same.”

While Getty is involved, the judge did not rule on Morel’s claims it infringed his copyright, adding that other issues needed to be resolved. In 2003, Getty and AFP entered into an agreement whereby each was able to market the other’s images in their respective territories.

The judge’s ruling stated that the photos were initially attributed by Getty to Suero, before an AFP employee, Benjamin Fathers, spotted that the images actually belong to Morel. That same morning, Jan. 13, 2010, AFP internally debated the attribution of the photos, with Fathers noting that “it is very difficult to know to whom the photos belong, that’s one of the risks of twitter but we are going to be vigilant so that we find the right bylines.” The agency attempted to contact Morel.

There are a few important points to consider here. Morel is a professional photographer with a vested interest in his work. While everyone has the right to retain their copyright for creative works, he actively makes a living from them and is more compelled than most to protect his intellectual property. He was also contracted to Corbis, a rival photo agency to Getty. Corbis was exclusive worldwide licensing agent for images he sent to it, and also appears to have a stake in the issue.

The AFP didn’t just use Morel’s images to highlight a story or provide context; it provided his work to an agency which profits from licensing photographers’ images. Indeed, the judge noted there was evidence that Getty was directly compensated for its licensing of the images.

Though the AFP discovered Morel’s photos through Twitter, they were actually uploaded by Suero to image hosting service TwitPic, which has different ToS than Twitter. The judge ruled that both ToS apply to the images, since they were distributed on Twitter.

In 2011, TwitPic changed its ToS in a way that caused many to believe it was claiming the right to sell user photos without permission. (Morel’s case stemmed from an incident in 2010, and so the most recent ToS won’t apply in his litigation.)

This is an issue which is both muddied by the fair use doctrine (that works can be used without the express permission of the copyright holder in certain cases, such as news reporting, comment, and criticism) and the fact that the photos were seemingly plucked from a Twitter user claiming the images as his own—one of the issues to be debated at trial.

That said, profiting from relicensing someone else’s work without express permission is the key issue here, regardless of whether AFP was able to determine the true copyright holder from misguided tweets or anywhere else.

Meanwhile, in the U.K., similar issues are being raised by the London Evening Standard’s heavy use of Twitter photos in a front-page story about a helicopter crash.