I cannot be the only one that is weary of seeing that accursed word attached to drivel and calling it 'news.'

How many column inches have been devoted to selfies? How many millions of words? How many thousands of hours and resources?

Enough is enough. This madness has to stop.

We writers are all guilty of this. I’ve written my fair share of “news” about selfies of dubious informative value (though I do maintain that attending #SelfieSchool—yes, it’s a thing—was one of the best life decisions I ever made).

Before I go any further, a disclaimer: I’m not calling for people to stop taking selfies; that simply won’t happen. Selfies are just a thing that people do now: People read books. People drive cars. People take selfies. People have sex. People die.

Even Bashar al-Assad is at it.

What I am saying is that we—we the media—need to stop covering them as if they’re this new, ground-breaking, earth-shattering thing. Something happened that’s vaguely selfie-related? Great! But that no longer makes it inherently newsworthy. The novelty has faded; that day has passed.

Yet… we keep trying to pass selfie stories off as real news—stories that are about nothing more than people taking photos.

To understand our tendency to turn selfies into stories, you first need to understand the selfie it… self. Problem is we seem to have a difficult time doing that: Even the definition isn’t agreed upon. It was originally established as a certain kind self-portrait, but we’ve started to see the term applied liberally to any photo with faces in it.

A good rule of thumb I learned in #SelfieSchool is intent. If the photo was directly constructed, framed, and intended by someone, it’s probably a selfie, even if they didn’t take the photo themselves—as was the case with Ellen’s record-breaking selfie.

If photographer Annie Leibowitz carefully set up and took a photo of herself—even if the shutter was pressed by an assistant—you could probably call it a selfie (though God knows why you’d want to). If Kanye commissioned her to take a photo of him, however—not even close to a selfie.

And yet even the basic rule of “intent” is increasingly disregarded. Take the Daily Mail’s thinly veiled advertorial about the “five most hilarious animal selfies of all time revealed by G Adventures.” These. Are. Not. Selfies. The animals are not in the photos deliberately, and they certainly aren’t taking them without assistance. Seals definitely don’t understand the concept of photos. I don’t think bearded dragon lizards even have self-awareness. These are simply photos of animals.

But language evolves, right? Perhaps “selfie” is just turning into “any image with a face in it,” right?

Respectfully, if that’s the case, we’ve completely lost our minds.

Selfie is a buzzword, plain and simple. The term is being liberally applied in an attempt to spice up total non-stories, and media editors are hoping their readers are too apathetic to care about this butchery of language and trends.

CTV News recently illustrated as much, attempting to ride the selfie hype wave by describing a photo students took as a “polar bear selfie.” Bro, that ain’t a selfie, no more than my taking a photo of a random person on the street would be. It’s just. A. Picture.

Here’s a good rule: If you take out direct references to the word “selfie,” does the story still grab and hold your attention? No? Then it’s not a good news story, and adding “selfie” to the headline won’t make it such. 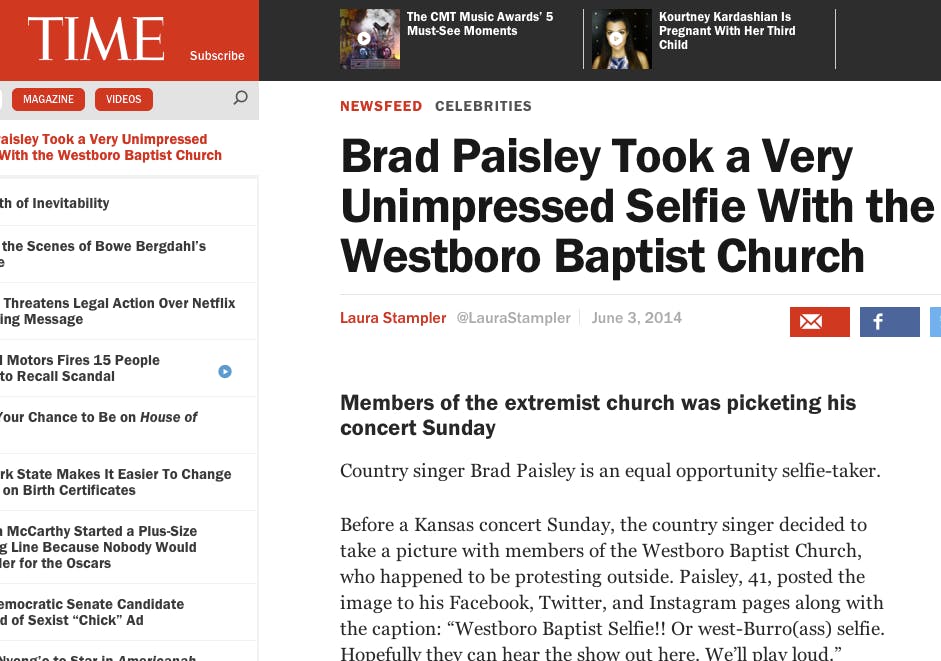 That story could be rephrased as: “Kinda famous guy takes photo with protesters.”

New York Magazine, we expect better from you. 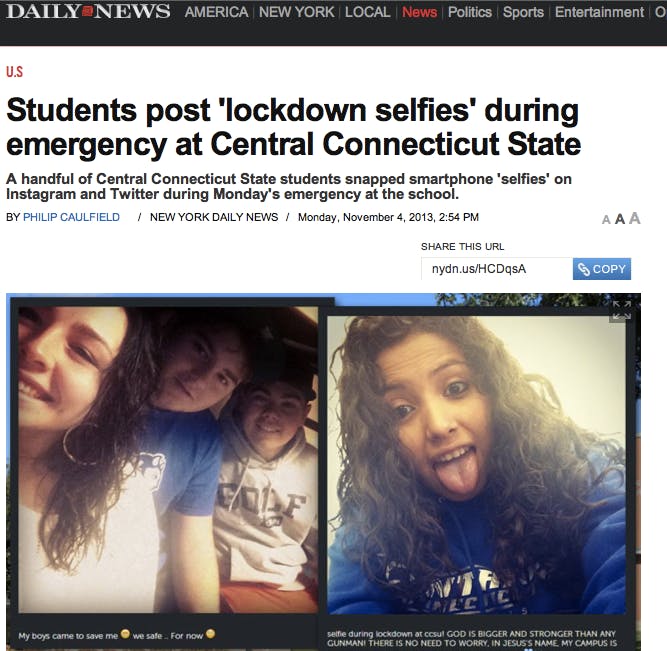 School on lockdown? News. Kids take photos of themselves during said lockdown? Not news. 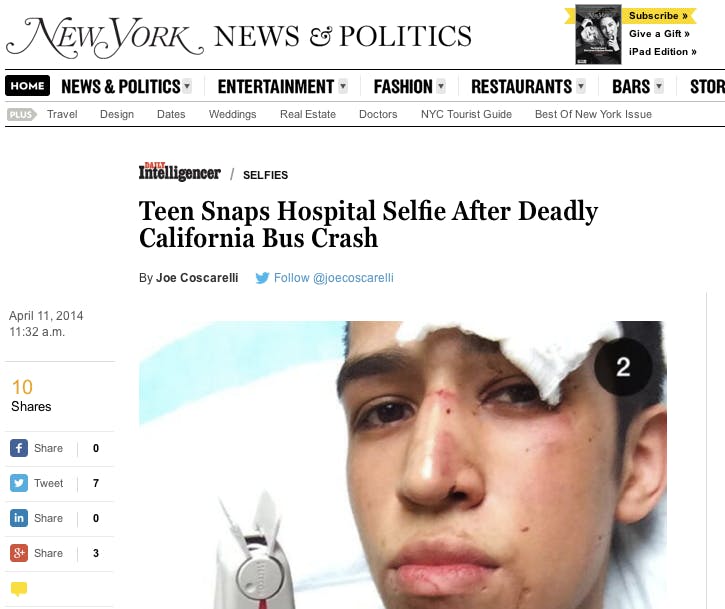 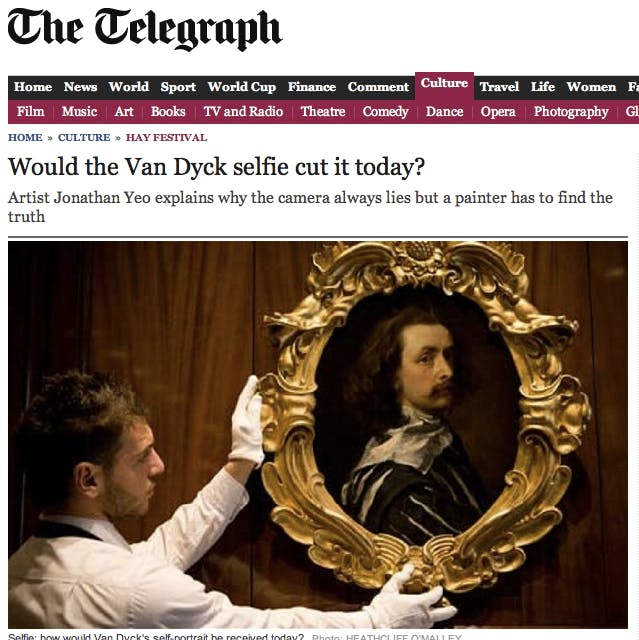 Take insightful article about the proliferation of mass photography, shoe-horn in a “selfie” reference, reap the precious, precious SEO points.

Some stories about selfies are newsworthy. Raising millions of pounds for charity, the #NoMakeupSelfie is a good example of significant selfie action. Definitely worthy of reporting on. Nice work.

However, just because taking selfies is now a significant human activity and form of self-expression does not justify perpetuating this selfie fascination meaninglessly. I won’t absolve this site of guilt: We have been lured in before.

But the time has come to change our ways—and besides, we’re far from the only ones. Exhibit A: Rebecca Smith.

In what is surely one of the greatest non-stories of the last decade, young Ms. Smith took a selfie (a selfie? A selfie!) with the British prime minister, David Cameron. Then lo and behold: Everybody lost their freaking minds.

The story was featured in the Daily Telegraph, Sky News, and Yahoo News. The Guardian put out a call for other selfies with politicians, and even paid Smith to write a column critiquing British economic policy and the “marketization of education.”

All this because she took a selfie.

Apply our rule, and look at the story another way: “Voter Meets Politician, Takes Photo.” It’s hardly the Pentagon Papers, is it?

This story perfectly illustrates the true function of the term “selfie”: It is a word that transforms the utterly banal into the something newsworthy. It has the power to turn the inane into the riveting—or so certain editors would like us to believe.

This selfie hype is, of course, why we’ve seen such an insidious definition creep in: If you can type up tripe, add a magic word and, just like that, transform it into News!, of course you’ll have a go.

At it’s very worst, this selfie fascination is a hideous misdirection that detracts from substantive comment. Take Time’s report on Barack Obama taking a selfie with Malaysian Prime Minister Najib Razak. Two hugely important world leaders meet each other, and there’s no discussion of what was two addressed, what policies were harangued over, what geopolitical ground was trodden.

Instead, we’re given just a few dozen words acknowledging that yes, these two men have heads, and yes, their two heads were once in close proximity, and yes, there was a camera present at the moment of head-closeness.

Let’s not even get into the Malaysian girl mentioned in the article, apparently “totally denied” a selfie with Barack Obama. Put another way, this apparently significant and noteworthy anecdote is nothing more than “most important man on the planet fails to acknowledge one utterly irrelevant girl and her phone—she among the billions, who lives 9,000 miles from his home.”

Journalism is a zero-sum game. There is a finite number of content writers (and re-writers) in the world. Every decision to write about selfies is a decision therefore not to write about something else. Column inches spent deliberating over whether taking selfies is a mental disorder (that most pressing of issues) are column inches not spent writing about the the efficacy of mental health services in preventing mass shootings, or other topical issues that might substantively add to public discourse.

Every research paper (and there are a lot) written about selfies is time, money, resources, and intellect not spent wondering about—well, just about anything that might actually matter.

But even if you don’t care about the bigger picture, can’t we just agree that seeing the word selfie shoe-horned into every other headline, regardless of relevance is GETTING REALLY DULL NOW, yes?

Sure, there may still be a market. People are still willing to read these stories after all.

24 hour news is a voracious, insatiable machine, and the selfie trend provides a never-ending stream of content, from #FuneralSelfies to #AfterSex selfies. Millennials like taking photos of themselves. It’s kind of their thing. They’re inserting themselves into the historical record, or something. Or maybe they’re just checking for zits.

There exists an anti-selfie movement that accuses the phenomenon of selfies of “infect[ing] the entire interweb with its pernicious purposeless vanity”—which seems a little extreme. If you want to take photos of yourself then take photos of yourself, I say. Live and let live! Selfie and let selfie! But I cannot be the only one that is weary of seeing that accursed word attached to drivel and calling it “news.”

Eventually, we will get sick of these “selfie” stories. Making selfies the focus of every article is akin to making every story and feature about literature about the act of writing, rather than the words themselves. Selfies are just another form of self-expression. We need to realize this, and stop acting gobsmacked when we “discover” that people have chosen to express themselves by taking photos of their faces.