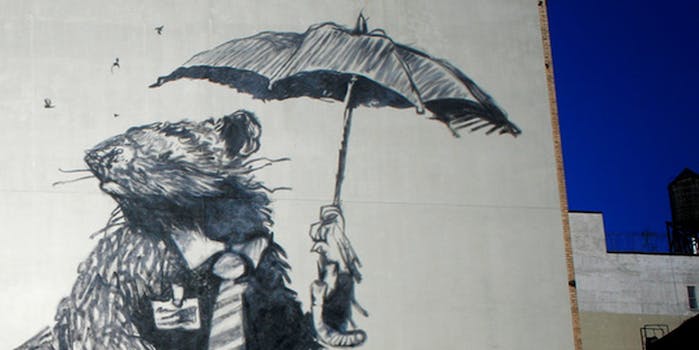 In New York, rats are a fact of life—all you can do is hope that the greasy critters don’t decide to set up shop in the walls of your apartment. Out on the street, a scurrying shadow may startle a tourist, but lifers here hardly bat an eye: for the most part, the rodents stay out of our way, and we stay out of theirs. But what happens when this delicate, unspoken truce breaks down?

In that case, you might get to experience a subway ride like the one captured by YouTuber Jinais Ponnampadikkal Kader, who sets a slapstick scene: “A usually boring Monday morning commute to work at Brooklyn was stirred up by this little guy,” he writes. “He joined us at the Fulton street station on the A train going downtown. Someone getting off the train was screaming ‘RAT on the train!’ But by the time everyone realized what was happening, the doors closed and the train entered the tunnel. We were stuck with him till the other end.”

It’s doubtful that anything could demolish the stereotype of New Yorkers as battle-hardened urban warriors faster than seeing them squeal and giggle and stand on their seats just because of a tiny train passenger who happens to be a vector for hantaviruses. Really, though, how else did they expect him to get to Dumbo?