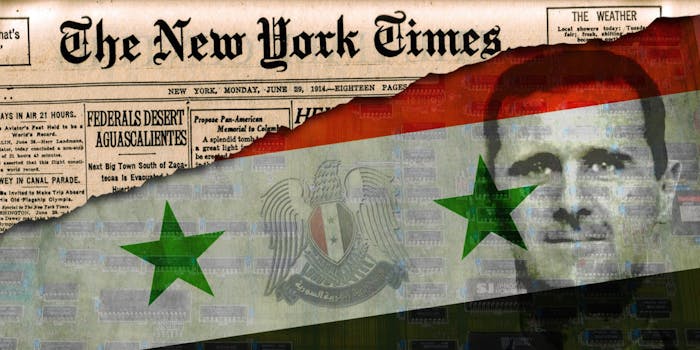 .@nytimes In less than 2 weeks we have another… pic.twitter.com/DV6q436YrL

Though nytimes.com was down, the paper still remained accessible from its IP address, indicating that the domain name was redirected at a different server.

According to the Post, those servers are located in Syria and Moscow and owned by the pro-Assad hacker group Syrian Electronic Army. This year, the group attacked a number of other sites, including the Telegraph, the Onion, and even the Daily Dot.

The hack comes in the wake of U.S. Secretary of State John Kerry’s announcement that the U.S. government would be retaliating—in some form—against Bashar al-Assad’s regime in Syria for using chemical weapons on citizens. Today’s Times homepage featured a video of Kerry’s announcement.

Twitter users also pointed to the SEA as the culprit. Indeed, it appears the the SEA’s IP address is now hosting a number of new domains including “sea.nytimes.com”—and Twitter itself.

Hi @Twitter, look at your domain, its owned by #SEA :) https://t.co/ZMfpo1t3oG pic.twitter.com/ck7brWtUhK

The SEA, usually quick to take credit for its attacks, waited a few hours to claim responsibility for the Times attack.

But everyone else got a chance to weigh in first.

Hackers took down https://t.co/5zIV6NkhQD. Which means the website now has as many readers as the print edition.

The New York Times released an article on the attack, writing,

Until now, The Times has been spared from being hacked by the Syrian Electronic Army, which has successfully disrupted the Web operations of news organizations like The Financial Times. On Aug. 15, the group hacked The Washington Post’s Web site through a third-party service provided by a company called Outbrain. At the time, the Syrian Electronic Army also tried to hack CNN. Some information security experts said the group also appeared to be ready to hack The New York Times Web site that day.