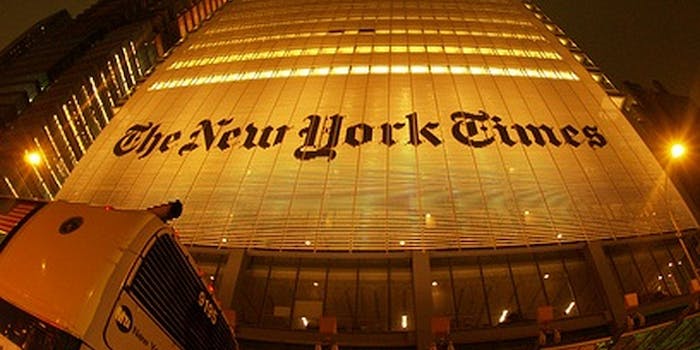 Taking down Twitter parodies? “New York Times” is on it

The New York Times took issue with popular Twitter parody @NYTonit—not for the account's criticism of the newspaper, but for a trademark violation.

GUYS, people make fun of trend stories in newspapers and The New York Times is ON IT.

The Grey Lady is fine with you making fun of it, as long as you don’t use its distinctive “T” logo in your avatar. Popular parody @NYTOnIt—whose tweets all start with “GUYS” and end with “The Times is ON IT”—found that out Monday evening, as it was temporarily suspended from Twitter after the newspaper complained about the account.

The Twitter account, which mocks trend stories the NYT covers, planked a Scumbag Steve-style cap on top of the “T” lettering for its avatar.

The NYT took exception to the image and filed a complaint with Twitter, Times spokesperson Eileen Murphy told Poynter. She added that the paper was “not seeking to disable the account however it is important to The Times that our copyright is protected.” Murphy later clarified she meant “trademark” instead of “copyright,” a fact which again raises the question: should the Times be a truth vigilante?)

The author of @NYTOnIt, Benjamin Kabak, regained access Tuesday after an appeal, though the account is missing the avatar which caused the kerfuffle and Kabak is looking for help in finding a replacement image.

What’s next? @nytimes_ebooks? @nytfridge? @NYTPrepositions? Are we just going to keep asking questions of the NYT à la that Guy Fieri restaurant review?