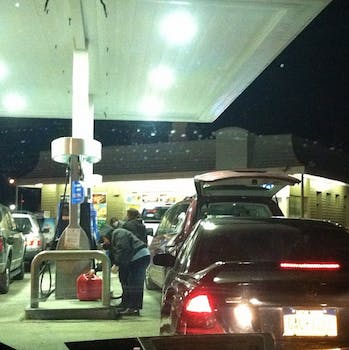 To get gas after hurricane Sandy, some New Yorkers are swapping license plates with their neighbors.

Craigslist is known as a place to swap hook-up stories, but a New Yorker is using it for something just as essential to share: license plates.

In a message posted to the “Items wanted” category on the Brooklyn section, a crafty resident is asking fuel-thirsty people if they want to switch license plates. It’s an attempt to maneuver around the gas rationing rules New York has imposed on its residents to alleviate hoarding and long lines that are crowding city gas stations after Superstorm Sandy.

The state is allowing people with license-plate numbers ending in odd numbers or a letter to fuel up Friday, while drivers with even numbers or a zero can purchase gas on Saturday.

To ensure the veracity of the plates, the post creator is suggesting that those interested to show up at the station in their vehicles with paper plate registrations and window stickers on their the cars.

“We would have to leave collateral for the borrowed plates to insure their safe return. The plates of the other should do,” they said.

The poster did not respond to the Daily Dot’s request for comment about whether they’ve found their license-plate buddy.