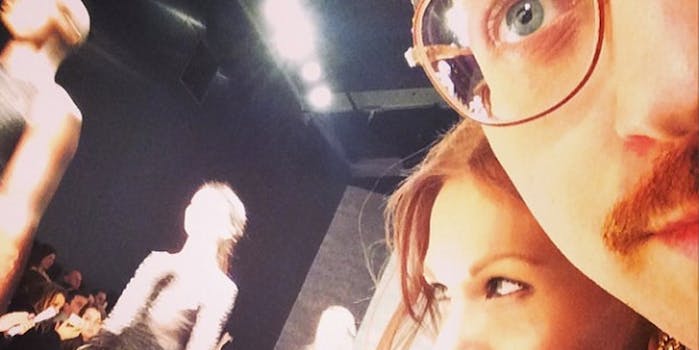 At Fashion Week, there’s the Twitter-verified and everyone else

Nimrod Kamer explores the need to be verified on Twitter during New York Fashion Week.

Fashion people are obsessed with being verified on Twitter. It’s god’s digi-gift falling upon you via an off-the-cuff DM, just when you thought you’ll never get it.

That’s what I found on when attending Fashion Week in New York, where I crossed paths with the likes of Zosia Mamet of Girls and Perez Hilton. We talked about humble selfies, being on the front row (or #frow), and how we felt when we joined Twitter’s verified circle.

While cutting the film above, we chose to leave unverified interviewees as they are, tickless, instead of placing a tick around their name with a red-cross marking it. That would’ve been humiliating. The lack of a tick on its own is embarrassing enough. All in all, I was proud to discuss these digi-issues with the many random and non-random dudes I met in New York. I never spoke to them about fashion at all, which provided a much refreshing break, as all other reporters kept asking about the latest collections and trying to speak about the unspeakable: obscure designers.

Nevertheless, I look forward to unfollowing all of these fashionistas in the upcoming installment of my weekly column, Unfollow Friday.

The only way to become unverified, according to Twitter, is to change your @handle:

Special thanks to lifestyle designer Isabella Charlotta Poppius who helped me get into all the fashion shows. Filmed as a selfie-vid by Nimrod Kamer, cut by Jamie Tucker at Green Rock TV, London, 2014.