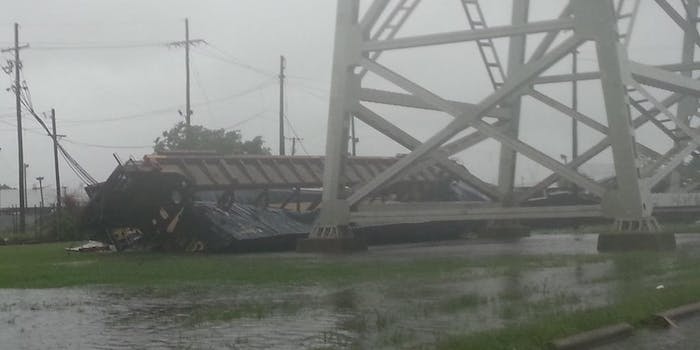 It's still unclear whether anyone was injured.

Wind gusts so strong that they prompted a severe-weather alert have already swept a train off a bridge in New Orleans.

From Chris Roberts: train fell off of tracks on the Huey Long Bridge. #4wwl pic.twitter.com/Apb2D50gNy

@MargaretOrr I think that these train cars fell from the tracks that run along the Huey P Long. pic.twitter.com/stcHFcH2yf

The NWS issued its alert for the New Orleans area at approximately 11:19 a.m. local time and said the warning was in effect for up to three hours.

“A wake low has developed bringing damaging wind gusts over portions of Southeast Louisiana,” the weather service announced, referring to a region of low atmospheric pressure that frequently creates severe weather. “Already [there are] numerous gusts near 50 to 55mph with Trees Coming Down.”

Update 4:29pm CT, April 27: Here’s some terrifying footage of the accident. So far, no injuries have been reported.