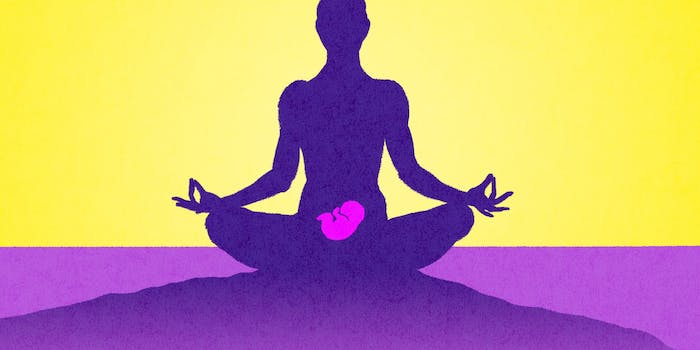 New moms #MeditateOnThis to fight the stigma of depression

A simple hashtag can go a long way.

New moms everywhere reacted to the news that a government task force recommended screening for depression during and after pregnancy. But not everyone applauded the idea.

New York Times best selling author Marianne Williamson wrote a Facebook post to her large social media following cautioning her readers that this was all a big ploy to support Big Pharma and that you can treat postpartum depression with meditation, love, and prayer.

Oh, if only it was so easy.

Currently one in seven women developing some form of a postpartum mood disorder (i.e. postpartum depression, postpartum anxiety, postpartum OCD, postpartum psychosis, etc…), yet only 35 percent of these women ever receive any form of treatment. The idea is that widespread screenings will lead to wider spread support, healthier moms, and happier families.

When I read Williamson’s post, I was enraged. Not only was this post hurtful, but it was harmful as well. There is already such a stigma associated with mental health in our society. It’s not talked about in the same way as heart disease or diabetes or cancer, despite impacting so many people. Combine that with the thick layers of judgment surrounding motherhood (and the ideal of the “Good Mother”) and the effect can be incredibly dangerous.

See, the thing is, I’ve been there. Hell, I’m still there. I have severe, debilitating anxiety that—at the moment—can only be managed with medication. Every night I dutifully take my two pills so that the next day I am able to wake up, get out of bed and actually want to be productive. My medication allows me to want to take care of my son and husband. It allows me to want to work. It allows me to take my dog for a walk and actually enjoy myself. It also allows me to do supplemental anxiety treatments like take yoga classes, receive acupuncture, and yes, Marianne Williamson, even meditate.

This happens each night so tomorrow I get out of bed & be productive. Prob not 4ever. It's my now. #meditateonthis pic.twitter.com/3LJFCG2nTp

But I wouldn’t be able to do any of those things, let alone have the strength to get up in the morning, if I didn’t have access to my medication. I know this, because it was only a year ago that I lost 20 lbs. in two weeks. My days flew by in a haze of heart palpitations, full body sweats, dizziness, nausea, zero appetite, and exhaustion. I was too busy panicking to even think about meditating.

Reading Williamson’s post, all the anxiety and anger and frustration I felt over the last year bubbled up and I knew that I couldn’t allow her words to hurt any woman who may indeed be helped by the idea of national screening. So, I did what I could, I fought back with my words.

There is already such a stigma associated with mental health in our society. It’s not talked about in the same way as heart disease or diabetes or cancer, despite impacting so many people.

I came up with the hashtag #MeditateOnThis in hopes that by co-opting Williamson’s own words, I could help give voice to the thousands of women who may have felt silenced by her post.

I reached out to Katherine Stone of Postpartum Progress and together we launched the hashtag. In less than two hours, #MeditateOnThis started trending and had reached a million people, and over the next day it would reach millions more. The hashtag struck a chord for many women, allowing them a virtual space where they could share their truths, their stories, and be in the company of others who had been there, and survived that. They were not alone.

My 5 kids have a mom because Wellbutrin saved my life @marwilliamson #meditateonthis pic.twitter.com/GMytH14lVj

@marwilliamson this picture, my smile,my life brought to you by ZOLOFT! #MeditateOnThis #savethemamas #endthestigma pic.twitter.com/1QjIB2RLNR

As the number of tweets and pictures grew, the power of the hashtag was almost palpable. And, despite Williamson backtracking slightly, what ended up being more important was that people had a place to talk about what they went through.

Who can meditate when their minds are racing? When they can't focus? Are anxious? Oh. Right. Nobody. #meditateonthis https://t.co/eqCx49vX6P

.@marwilliamson #meditateonthis is trying to help you understand. We prayed. We ate well. We were loved. We still almost died. #medssave

.@marwilliamson one must be ALIVE in order to meditate. Meds save lives. #meditateonthis

I was also able to share bits of my story. Others shared how grateful they were for healthcare providers who gave a damn. Tweets ranged from outraged to heartbreaking to hopeful. And, they’re still coming.

The hashtag has moved from a deliberate pushback against one person and they’re damaging comments to being a digital archive for those living with various mood disorders. There was power in reclaiming the idea of mediation to focus on our own truths.

Many people may questions the power of hashtag activism, but after I saw the response to a hashtag I created last week, I will never underestimate the strength of new moms—and the power of a viral pushback.

Avital Norman Nathman is a freelance writer whose work places a feminist lens on a variety of topics, including maternal health, reproductive rights, gender, parenting, and pop culture. Her first book, The Good Mother Myth: Redefining Motherhood To Fit Reality, came out January 2014 from Seal Press. She’s currently working on her second book, looking at the idea of perfection within the U.S. birth industry.  Follow her on Twitter @TheMamafesto.