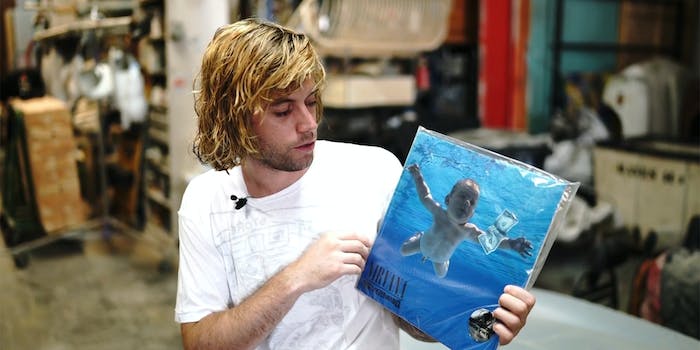 The lawyer for the man on the album cover said it made him look like a 'sex worker.'

Nirvana’s album cover for Nevermind is world-famous, but nearly 30 years later, the man on the Nevermind album is now suing, and he claims that the album cover is child pornography.

At just 4 months old, Spencer Elden was photographed naked in a swimming pool as a dollar bill on a fish hook was dangled in front of him. His parents were compensated $200 for the shoot, and Elden has recreated the album cover several times and spoken about it several times. In a lawsuit filed in the U.S. District Court’s Central District of California on Tuesday, Elden’s lawyer, Robert Y. Lewis, argues that the photograph makes Elden look like a “sex worker.”

“Defendants intentionally commercially marketed Spencer’s child pornography and leveraged the shocking nature of his image to promote themselves and their music at his expense,” the lawsuit reads, according to Variety. “Defendants used child pornography depicting Spencer as an essential element of a record promotion scheme commonly utilized in the music industry to get attention, wherein album covers posed children in a sexually provocative manner to gain notoriety, drive sales, and garner media attention, and critical reviews.”

The lawsuit reportedly claims that Elden’s parents never signed a release form for the photograph that became Nevermind’s album cover.

Elden is seeking at least $150,000 from the surviving members of Nirvana (Dave Grohl and Krist Novoselic), photographer Kirk Weddle, art director Robert Fisher, those involved with Kurt Cobain’s estate (Courtney Love, the executor; Guy Oseary and Heather Parry, the managers), as well as the record companies who have, at some point, released Nevermind.

Elden has recreated the album cover several times over the years, most recently in 2016 for Nevermind’s 25th anniversary. He also discussed never meeting anyone from Nirvana, telling Time that it’s “pretty difficult—you feel like you’re famous for nothing, but you didn’t really do anything but their album.”

“It’s hard not to get upset when you hear how much money was involved,” Elden said. “[When] I go to a baseball game and think about it: ‘Man, everybody at this baseball game has probably seen my little baby penis,’ I feel like I got part of my human rights revoked.”

Online, the lawsuit is largely being met with derision and jokes, while some suggested other albums that various people should sue over.

Some people pointed to Elden’s embrace of the cover, which included previous photoshoots, a tattoo of “Nevermind” on his chest, and older interviews (such as the one he did with GQ Australia in 2016 about trying to contact Nirvana about an art show and being referred to their lawyers and agents) and to suggest that the lawsuit was an attempt at a cash grab.

“The baby on the Nirvana cover grew up to be the guy that Nirvana made music against,” Shiv Ramdas observed.

Update 2:27pm CT Aug. 25: When reached for comment, representatives for Elden provided the Daily Dot with a statement in which they called it “an issue of consent” and said Elden “never had the opportunity to give” his consent.

“Nirvana’s use of our client’s picture in their album cover is nothing less than child exploitation,” they said. “Spencer’s image created massive commercial success for Nirvana for which Spencer never received any compensation. Neither Spencer nor his legal guardians ever signed a release authorizing the use of any images of Spencer or of his likeness, and certainly not of commercial child pornography depicting him for worldwide distribution.”

The statement also quotes Elden as saying, “Nirvana exploited me when I was a baby to sell their music, but there is a person behind every image. … I’m just asking the band to do what they should have done 30 years ago and redact my genitals from the image out of respect for my privacy. If the world could forget about it, then maybe I could forget about it too.”

The Daily Dot has reached out to representatives for Love.