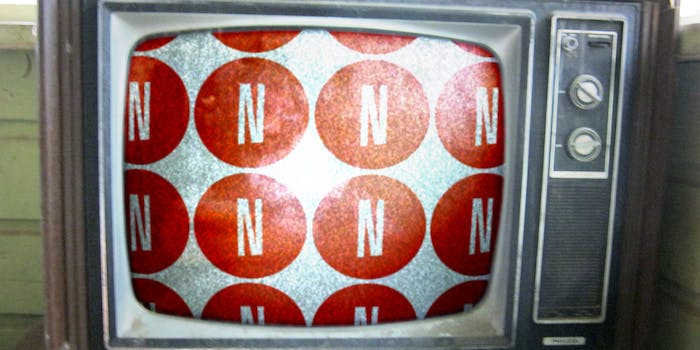 For Netflix, the war against TV networks has already been won

Netflix will dominate tomorrow's TV landscape. And nothing can stop it.

Ten years ago the age of newspapers was wearing thin. America’s print pillars still lorded over the landscape, but change was in the air.

News media of course now lives and breathes by online algorithms, and recent numbers from the Pew Research Center show an industry utterly run into the ground by the Internet: with declining newsroom employment, subscription numbers, and ad revenue.

Newspaper Death Watch has kept a comprehensive list of daily metropolitan papers that have died since 2007. The site lists 12 dead ones with another dozen just barely clinging to life.

We’re on the eve of another such transition.

In fact executives at television networks may want to start looking over their shoulders, because objects in their rearview mirrors are closer than they appear. Networks today are beginning to look down the same black hole newspapers did a decade ago: Recent weeks have shown the desperation these conglomerates have felt over the rising tide of Netflix and streaming services.

In September, 21st Century Fox CEO James Murdoch, son of media magnate Rupert Murdoch, said the company’s position on streaming services is “evolving” after years of stingy relations with video on demand. Murdoch’s comments were followed by a report from analysts at Morgan Stanley deeming Netflix “too powerful” for studios to ignore.

“Perhaps the silver lining is now the market is fully aware.”

Broadcasters are finally realizing what many industry critics have been saying for years: desperately clinging to their traditional model is a sucker’s game. NBC and CBS have each premiered their own subscription streaming services and it’s only a matter of time before Fox, ABC, and others get in the on the action. But the longer competitors take, the more likely it is they’ll find Netflix has already set the rules in its own favor.

Up to this point, networks and executives have been exhibiting an attitude more befitting of Alfred E. Neuman than the leaders of a dying industry. At a panel hosted this summer by Fortune, industry executives called cord-cutting a “myth,” despite studies showing Americans either reducing their cable plans or ditching them entirely in greater numbers.

Less than a month after the panel, quarterly earnings reports sent media stocks tumbling after 566,000 Americans had abandoned their cable subscriptions in the preceding months. That’s nearly twice the number of people who did so last year.

“Cord-cutting is real,” MG analyst Ben Swineburn said in response to the Wall Street sell-off. “Perhaps the silver lining is now the market is fully aware.”

Netflix is almost the sole beneficiary of this disruption. While streaming services are growing across the board, Netflix has surpassed Hulu, Amazon, and even HBO’s standalone service HBO Now as the face of the changing media landscape. The company’s last earnings report revealed a surge to 70 million subscribers, rocketing it past CBS in total worth. Netflix is so assured of its own dominance, CEO Reed Hastings recently told CNBC digital streaming will completely overtake broadcast television in just “10 or 20 years.”

Success for Netflix should mean success for the studios and networks which stock its digital shelves. Netflix continues to rely on networks for its coffers, obtaining highly rated new shows like Jane the Virgin and Gotham, but a growing list of acclaimed original shows and features films as well as a potential push into news broadcasting is challenging that notion. Netflix recently announced a $5 billion budget for original content in 2016—for comparison, the company had just $3 billion in 2013 when it unveiled Orange Is the New Black and House of Cards. In just the past month, the company unveiled Beasts of No Nation—a child soldier war epic that is already the target of Oscar speculation—and Aziz Ansari‘s critically acclaimed comedy Master of None.

The more Netflix pushes into original content, the less the company will need the networks’ back catalogs.

For much of its existence, Netflix has relied on studios and networks for programming. As the company becomes more and more ambitious in its own productions, networks are rightfully afraid the roles will be reversed. The nightmare scenario for networks is for Netflix to become the gatekeeper to viewers, with studios dependent on the service to provide shows to new viewers. Not only would this remove ad revenue from the equation—Reed Hastings has continually said Netflix will never run ads—but it would leave networks with only one customer.

A report from last week reveals just how much networks are willing to change to fight what the Wall Street Journal calls the “Netflix Problem.” According to Bloomberg, networks owned by Viacom, Time Warner, and Fox have begun showing fewer commercials to lure in young millennials spoiled by Netflix, with some lower-tier networks like truTV cutting their ad space by as much as half (a move that will likely raise the value of said commercials). Executives at cable companies like Time Warner are also urging networks to load more of their shows to on-demand services provided by the cable company itself, as opposed to syndicating them on Netflix.

The third road out of this desert? Branded streaming services coming out of different TV networks. NBC and CBS released SeeSo and CBS All Access, respectively, as standalone versions of separate apps they provide to cable customers. HBO took the lead on this issue when it unleashed HBO Now, and it already has more than one-million subscribers. Despite fears Now would cannibalize HBO’s other revenue sources, HBO Now has seen strong growth without much loss among cable subscriptions.

For beleaguered broadcasters, HBO’s example may be a light at the end of the tunnel. But whatever moves it makes are not the visionary decisions of forward-thinking executives. These are necessary decisions by corporate leaders who have ignored a looming threat for too long. While Disney and Comcast might have been counting their money from live broadcasts—a massive market area Netflix hasn’t ruled out conquering—millions of Americans have abandoned cable altogether.

The more Netflix pushes into original content, the less the company will need the networks’ back catalogs. What was once a symbiotic relationship is now a contentious struggle between an industry gasping for air and a competitor holding its head under the surface.