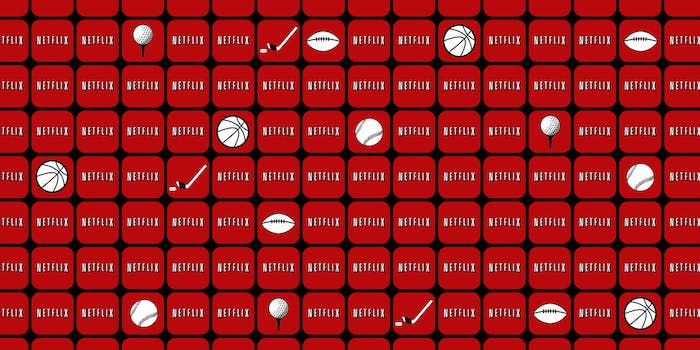 Netflix has been ridiculed this week for a leaked PR email that lists suggested films for getting through Wednesday, a day when no major sports air on television. The email opened like this:

Happy Monday! Netflix wanted to share a couple fun lists, in anticipation of July 15th: That one day a year that sports enthusiasts fear most…The Day Without Sports. On this day, fans will see no professional sports on television as a part of the MLB All-Star break. Men be warned: girlfriends and wives around the U.S. are going to take “no sports on TV” as an invitation to gain some serious TV power – whether by recommending a favorite rom-com or multiple episodes from a favorite drama series. And, women be empowered! Sports will not be there to save him this time.
For the men, Netflix has put together a list of content that will help you and your girlfriend compromise on your entertainment:

The list is then given, with one-sentence descriptions for each film. Here’s the one for Silver Linings Playbook:

Satisfy her need for romance, and you’ll get the added opportunity to view Jennifer Lawrence the entire time.

The email’s sexist attitude has been called out by many of the online publications that received it (Jezebel’s take is a great example), and we have given our own suggestions for activities on July 15.

But we want to give Netflix the benefit of the doubt on this. After all, humor is sometimes lost in translations with emails. So, we asked the manliest man we know, Mikey “Milkdud” Mahone, to take a look at the list and break the email’s films down for its intended audience. Here’s what we he came back with.

Rudy is a great film for tricking your girl into watching a sports film. It stars that guy that was in those rings movies for dorks that was in love with Fredo or whatever (sorry if I’m not an expert on those flicks, but I’m not really into fantasy bullshit), so if your girl’s a nerd she’ll probably be thinking about wizards and giant birds or whatever too much to realize that she’s watching a real movie that’s about FOOTBALLS, and how important it is to be really sweaty all the time so you can achieve all your goals and become a legend and have a movie made about you.

The ending might make your eyes water up a little, like a girl’s eyes do when they’re on their period or see commercials about babies, so you’ll want to cover that up by bringing out an onion to eat toward the end of the film, or having your hand in your pocket and casually saying “sometimes I just tug really hard on my scrotum, to make it tougher [Never forget the old saying: “It takes a tough scrote to float the boat”]. That way, when Rudy finally gets to be in one play after years of physical and emotional abuse, your girlfriend won’t think you’re crying because of your feelings (aka that you’re being a wuss that can’t protect her against potential muggers in the future).

Don’t be fooled into thinking this is a sports show, just because the cover has a horse’s face on it. It isn’t. Yeah, there’s horse racing mentioned, but I haven’t seen any actually happen so far. Instead, it’s all behind-the-action stuff, but luckily that’s all about gangsters and rivalries and badass shit like that, like The Godfather, and we all know that drinking a bottle of cheap whiskey while watching a Godfather marathon on USA is the manliest thing you can possibly do—not only on Christmas Day.

This will be a tough sell for your girlfriend, but just assure her that it’s filled with attractive, sweaty, tough men and that they all have accents. These dudes are all super hot, and each in different ways. Cillian Murphy has those gorgeous eyes, Iddo Goldberg has that perfect nose and cheekbone structure (and just enough scruff to make him rugged yet sensual), and Paul Anderson has that mustache that, against your upper lip, would just feel… I mean… that slight, but assertive tingle…

Um, anyway, that’s what you can tell your girl, and that should sucker her into watching. Meanwhile, you can enjoy the fistfights and crime and corruption and dudes killing other dudes and dudes nailing prostitutes in alleyways and then throwing up and dudes getting out of bed in a way that lets your see their butt, and… I mean, er, all sorts of awesome, badass stuff.

You might think that some of this badass stuff might offend your girl, because women tend to be weaker with stuff that’s awesome, but hopefully she’ll be too preoccupied with the thought of those men’s strong arms, just… just holding you, I mean her, tight and secure in their grasps.

Now here’s a TV show about football. It opens with some sports dudes talking about the new high school football coach of the Panthers, as he stands right on that 100-yard warzone and envisions the glory that he’ll be heralding to this small, shitty town that he’s in.

After that, we get to the players at home, getting ready for practice. This is where your girl can get her end of the compromise: There’s a few solid minutes of shirtless dudes, and these dudes are hot. I never liked that guy that played Todd in Breaking Bad—I just believe that anybody that can act that cold in a TV show must have something wrong in real life—but when I saw him shirtless in this show, I changed my mind completely: He’s clearly a nice guy, and I thought “wow, my girl’s definitely going to get the girl’s version of a boner when she gets an eyeful of this dude’s ab muscles. They’re unreal!”

For dudes, other than the football (duh!), there’s the babes, and boy are they ever… just so great. They all totally look very, like, hot and stuff like that. I mean, I’m definitely attracted to all of these girls in this show. Sure, on the TV they might be playing high schoolers, but let’s get real, bro: In real life, none of these guys, I mean girls, are really underage, so go right on ahead and fill up that spank bank of yours with boobs and butts and abs and biceps and… er… onto the next one.

This is a show about basketball, but your girl will still be totally into it because it aired on CW, and every girl likes everything that’s on CW.

The pilot opens with a high school basketball team playing a real game, while some other dudes are playing fake basketball on the street, and they’re all wearing hoodies, so we know that their lives are probably totally shitty and not going anywhere because they clearly have attitude problems.

Anyway, after a big comeback at the real game, the real players steal a real school bus and most of them are booted from the team, because I guess having a good time is now illegal in high school. It leaves the team with an extra spot (luckily, they’d had about 30 players too many before the bus thing happened), and this one dude that plays fake basketball is asked by the coach to play real basketball.

So why would a girl or whatever want to see this show, other than the CW factor? Three words: Chad Michael Murray. He is, like, really hot, and he just happens to be the one dude that’s asked to join the real team. So now you have a rebellious kid that’s super hot, a hidden basketball star, and is now playing real basketball in a cute, I mean regulation-fitted, uniform—that’s every person’s sexual fantasy!

Jus to make things clear: I definitely think the mom and sister characters are totally doable (at least, I think it’s his sister—if not, why is she not trying to hit that hottie?). Character wise: They are both definitely total babes that I’m really, honestly attracted to.

I’m a little disappointed that no dudes are shirtless in the pilot, though. I mean, for realism reasons. I’m a stickler for realism, and it just seems like some dudes in a basketball show would, like, have their shirts off or whatever. I mean, it is a sports show, for fuck’s sake.

This movie doesn’t really have that much sports in it. It’s mostly sports talk, but there’s only a few cutaways to TV screens where you get to actually see the sports happening. Luckily it’s football, and not something like soccer, so at least the few short cutaways are good for something. There’s betting, though! And even some really high stakes betting!

Although, in all honesty, I really can’t endorse this movie at all, because the football fans and the betters are all STUPID FUCKING PHILLY FANS. I’M FROM DALLAS. IF I SEE AN EAGLES FAN, I’LL… I DON’T EVEN KNOW WHAT’LL HAPPEN, BRO, I DON’T EVEN FUCKING KNOW.

Anyway, if you weren’t born in the same state that I was, I guess that above part doesn’t matter to you, so let’s get onto the other good stuff: Man, is Jennifer Lawrence a babe, or what? She has a great figure. Her boobs are just super good. Her lips, man… they always get me all, I dunno… I mean, just “wow,” is all I can say. What a woman.

So why would a girl want to watch this movie? Well, there’s a lot of drama, and it’s a love story, but the biggest draw for the chicks is probably Bradley Cooper. He’s a little crazy in this movie, but he is really fit. And he learns how to dance, and he’s not so great at first, but with practice gets so goddamn graceful.

I mean, you know when there’s a guy that’s really attractive? I mean, to girls? And you think “Well, he’s that attractive, so he can’t possibly be funny, too. Right?” Wrong. Cooper is the total package. He’s unbelievable, this guy. I see all of his films, even the ones that I don’t think will be very good, just because I love seeing Bradley Cooper. I’ve watched The Hangover III about 13 times.

I mean, I’m not obsessed with it or anything, but I did go through certain scenes on my Rocky Blu-Ray, frame by frame, to try and get a look at what he’s packing down there, and I just couldn’t get a read on it. A few times, I thought I had it outlined pretty well, but then the next frame would show that it was just the way his pants were wrinkled.

Anyway, if anybody has a copy of that thing, please let me know.

Oh, um: This movie’s about boxing. I almost forgot to cover that.

What the fuck is this shit doing on this list? I watched 10 minutes, and it’s nothing but Kerry Washington in a suit, and all the dudes are in suits, and this… This doesn’t seem like it has anything to do with sports at all.

I’ll smell you puke stains later. Duggland just got a 72″ TV, so we’ll probably just spend the Day Without Sports doing a frame-by-frame of when Rocky is climbing those stairs in that one scene again.