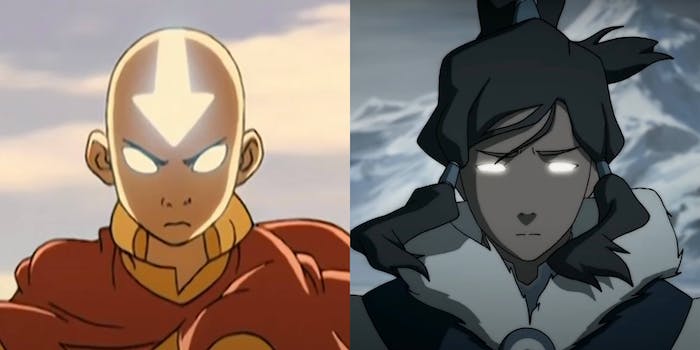 In the days since Avatar: The Last Airbender returned to Netflix, people have revisited a series they loved while others are just discovering it for the first time; it’s currently Netflix’s most popular title. In the same vein, many of the same arguments about both ATLA and its sequel, Legend of Korra, that emerged during their respective heydays are starting to resurface—and even the streaming service is stepping in to break up fans’ latest fight.

There are plenty of discussions around favorite episodes, arcs of redemption and atonement, and shipping. But some also took it as an excuse to take shots at Legend of Korra, which spread quickly online as fans started to debate which one was better. (Both ATLA and Legend of Korra had the same creative team in creators Michael Dante DiMartino and Bryan Konietzko, as well as some of the same writers and directors on staff.)

One fan even took artwork of Aang, Katara, Toph, Zuko, and Sokka as adults and used it to say, “Imagine an alternate Universe where 4 seasons of this dropped instead of Korra.” While that photo is official artwork, it wasn’t intended to be a sell for an adult ATLA series. Rather, it was released as a San Diego Comic-Con exclusive poster in 2012 with the caption “Old Friends” paired with a similar rendition of Legend of Korra’s Team Avatar that featured the caption “New Friends.” Naturally, the debate grew with arguments ranging from Korra as a character (some going as far to scoff at a story around a female Avatar), the legacy characters playing a smaller role than desired, and even the romances; arguments that actually, Legend of Korra is the better series, also followed.

One of Netflix’s official Twitter accounts dedicated to genre-friendly and geeky content refused to put down Legend of Korra (which isn’t on Netflix) and validated its place within the world that ATLA created while also defending Netflix’s plans to make a live-action ATLA series that has both DiMartino and Konietzko on board.

It’s definitely tempting to put one series down while lifting the other up. We love ranking things, comparing things, and complaining about things; as we’ve seen with nearly any reboot, revival, prequel, and sequel series out there in recent years, there’s an additional level of scrutiny attached to a story’s continuation or reshaping. Not to mention that ATLA, a series whose lasting impact is blurring the lines between children’s and adult animation through many of its more mature themes, is so beloved and critically acclaimed that Legend of Korra was already in the nearly impossible position of being in ATLA’s shadow before we saw a single frame of it.

Both of those shows were flawed and ambitious, although you can definitely argue that Legend of Korra’s flaws are more noticeable than ATLA’s at certain points, whether that’s due to Legend of Korra airing more recently, nostalgia toward ATLA, or other factors within the series itself. Both shows ended with grand romantic gestures, and both series had official comic book series that continued each respective story.

However, at each series’ heart, they’re telling vastly different, serialized stories that tackled the kinds of topics that other shows for kids weren’t tackling at the time; some of ATLA took on genocide, colonialism, child abuse, and animal cruelty while parts of Legend of Korra tackled revolutions, revolts, fascism, and PTSD.

“There were times even I was surprised we were able to delve into the really tough stuff on a children’s TV network,” DiMartino wrote on Tumblr after the Legend of Korra series finale aired in 2014. “While the episodes were never designed to ‘make a statement’, Bryan and I always strove to treat the more difficult subject matter with the respect and gravity it deserved.”

Aang’s story is a three-season arc to stop the Fire Nation, which already wiped out all of the Air Nomads, and to restore balance to the world. Legend of Korra shows a more advanced society in the wake of the peace that Aang and Fire Lord Zuko fostered. ATLA had one major big bad with small factions of nuanced antagonists within those ranks while Legend of Korra had a variety of villains over its run. Aang’s struggles are external (he starts off as solely an Airbender and he has to master all four elements to stop Fire Lord Ozai) while Korra’s struggles are on a more internal level (she starts the series having essentially mastered three of the four elements). Aang is a more spiritual character who struggles with having to resort to violence, even necessary violence while Korra is more hotheaded at the start but struggles with connecting to her more spiritual side.

Granted, Legend of Korra couldn’t resist some ties to the first series. Iroh gives Korra an encouraging chat in the Spirit World, something he did with Zuko so many times, while we briefly catch a glimpse of Admiral Zhao in the Fog of Lost Souls. Aang, as the last Avatar, is a mentor to Korra like Roku was to him. The glimpses we get of Team Avatar are brief and often complicated; for example, we learn that while Aang was a great Avatar, he wasn’t exactly a great father, especially to his non-Airbender children. Their roles tend to mirror what we would see play out in the Star Wars sequel trilogy: These characters are mentors and they might play a role in shaping a new generation of heroes. But their faults, compromises, and missteps in trying to make the world a better place led to some of the problems that Korra, Mako, Bolin, Tenzin, and Asami face.

Legend of Korra even pokes fun at its own ATLA fanservice in its final season when Korra meets an older Toph Beifong. As Korra attempts to get Toph to relay ATLA’s glory days, Toph’s statements, while accurate, are the understatement of the century.

And yes, ATLA was incredibly influential. But so was Legend of Korra.

Legend of Korra ended with Korra and Asami about to venture off into the Spirit World for a vacation standing close to each other and holding hands. They didn’t kiss, as Aang and Katara did at the end of ATLA, but the implication was there from how they were drawn to the romantic theme from composer Jeremy Zuckerman: This was the start of a new relationship. But it was one that DiMartino and Konietzko couldn’t depict on-screen. LGBTQ representation has been notoriously slow in animation, and in separate posts that confirmed the Korrasami romance, DiMartino and Konietzko confirmed that they were only allowed to go so far in showing it; the comic series that follows was able to be more explicit about their relationship.

Around five-and-a-half years later, much more is possible. Steven Universe featured a same-sex wedding between two major characters. Adventure Time ended with Princess Bubblegum and Marceline sharing a kiss. Voltron revealed that one of its main characters is gay, although that didn’t come without its own set of controversies. And She-Ra and the Princesses of Power, which already featured several LGBTQ characters throughout the series, made the relationship between Adora and Catra central to the plot of the final season.

Which show is better? Ultimately, it doesn’t really matter that much because in the long run, what both of them left behind matters much more. And so many animated shows that followed them are all the better for it.