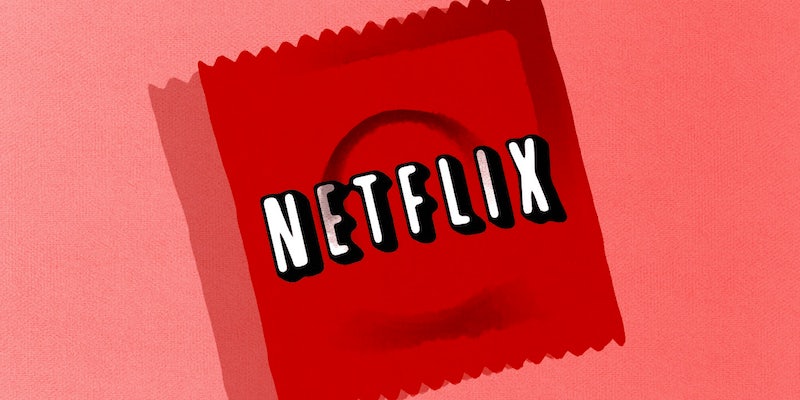 How the ‘Netflix and Chill’ meme spun hilariously out of control

When you're on a budget, there's always YouTube and chill.

The “Netflix and Chill” meme has gotten totally out of hand, and there’s no way to hit “pause.”

The seemingly innocuous phrase—which, in layman’s terms, means “come over to hook up”—has exploded in popularity over the past couple of months. Netflix and Chill derives from the idea that an interested party invites someone to a makeout-friendly locale, supposedly to relax and stream content on Netflix together. But, as most people who have been wooed by the prospect of Wet Hot American Summer, Sense8, or House of Cards know all too well, the host often wants a happy ending well before the end credits roll.

In terms of presentation, the “Netflix and Chill” joke is typically accompanied with some sort of photo. The image is either “the look” that a hookup partner gives you to initiate the sexy times, or some other picture that alludes to carnal desires.

Know Your Meme reports that the meme first started popping up on Black Twitter in late 2014 as part of the “starter pack” meme. The phrase has trickled down to Reddit, Tumblr, Instagram, and other social networks, spreading far and wide over the summer of 2015. The number of Google searches for “Netflix and Chill” has skyrocketed since  June 2015.

Capitalizing on the meme’s momentum, self-described “notorious urban satirical entertainment website” Huzlers.com—aka a fake news outlet—ran the post “Mother Sues Netflix After ‘Netflix N Chill’ Session Resulted In Her Daughter’s Pregnancy.” In it, a 16-year-old “Andrea Brown” was quoted as saying, “It happened like you thought it did … First, we were just watching a movie on Netflix and then all of a sudden there was a p*nis in my mouth.” We all know Andrea’s situation, even if the story was made up.

The story also cites “Hulu N Chill” as an activity that doesn’t lead to sexual intercourse as often as its Netflix counterpart. Although those numbers are completely made up, “Hulu N Chill” and variations on the original meme have indeed been popping up of late.

Many of these spinoffs deal with some sort of other video streaming service and deliver punchlines in relation to the given platform. The more evolved forms, meanwhile, cite a specific movie or show and pull an image from that piece of pop culture.

Really, the possibilities are endless. Doesn’t even matter if the movie’s ending is sad, because you’re probably not going to make it that far anyway.Netflix and Chill has become mainstream enough that even Nicki Minaj has posted a version of the meme on her Instagram account.

A meme’s survival is largely dependent on both its universality and how well it lends itself to evolution. Netflix and Chill is a pretty solid balance of those two aspects. The video-streaming service is a household name nowadays, a large component of first-world entertainment. Match that with human sexual desire cloaked as “chilling,” and the meme has real legs. Netflix and Chill may have spun wildly out of control, but it remains just as compelling and enticing as a subtle booty text from a cutie.

Can Netflix and Chill hope to survive the eventual slew of brands—Netflix itself prime among them—trying to use the meme to market to a younger demographic? Probably not. So be sure to chill while you can.