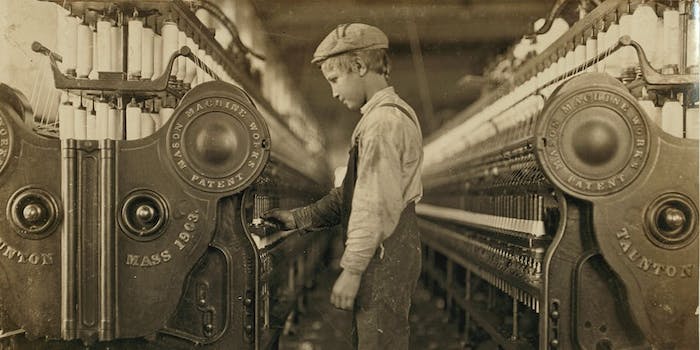 You'll never want beef again after you find out what Conagra does on their production lines.

Coca-Cola, Nestlé, and Walmart are all in the news this week for their water bottling operations in drought-stricken California, where firms across the state process water for profit at 111 sites. All three firms have long been the targets of criticism for their labor practices, environmental violations, and more, but they’re hardly the only—or worst—offenders in an exploitative corporate landscape.

Help keep Nestle the hell out of Oregon!!! #nonestle

https://t.co/kOF2Dw4Cj3 Do it. Nestle wants all the water so that you have to buy it from them. Watch the documentary 'FLOW'. #nonestle

In an era when companies are constantly being called out for offenses like sexual harassment, environmental exploitation, and worker abuse via hashtag campaigns, it’s difficult to pick the worst offenders. Once narrowed down, they represent depressing lists of nearly unavoidable companies—to address concerns about corporate malfeasance, people essentially need to live in hermit shacks in the woods. (But don’t use timber from Sierra Pacific Industries to build that shack, as the firm is currently in trouble for devastating California’s forests.)

The banking giant makes for an easy target, but it’s one of the country’s most hated companies for a reason. The whole financial industry is rife with companies known for contributing to the financial crisis, tolerating sexual harassment in the workplace, and creating a toxic environment for employees, but Goldman Sachs occupies a special role in financial hell.

Lest you think the company’s role in financial turmoil is over, its role in the Euro market means that it may become a key player in the battle over the Grexit and Greece’s mounting debts.

“The first thing you need to know about Goldman Sachs is that it’s everywhere,” wrote Matt Taibbi for Rolling Stone in 2010. “The world’s most powerful investment bank is a great vampire squid wrapped around the face of humanity, relentlessly jamming its blood funnel into anything that smells like money.”

Goldman Sachs has been the target of multiple lawsuits alleging sexual harassment and pay inequity. Moreover, Goldman Sachs has fired people who don’t meet the company’s exacting appearance standards, make the mistake of talking to the press, or dare to put “inappropriate photos” on their social media accounts. The firm has also leaned on port truck drivers and other vulnerable workers.

In 2012, Greg Smith, a former high-ranking Goldman Sachs employee, took the company to task in a New York Times op-ed explaining why he was leaving the venerable financial firm. “It makes me ill how callously people talk about ripping their clients off,” Smith wrote. “Over the last 12 months I have seen five different managing directors refer to their own clients as ‘muppets,’ sometimes over internal e-mail.”

As with the financial industry, the oil and gas industry presents a case of “how can you pick just one?” Offenders like British Petroleum, infamous for the Deepwater Horizon spill in 2010, Exxon, home of the Exxon-Valdez oil spill, or Chevron, culprit behind substantial pollution in Richmond, Calif., one of the state’s poorest communities, give Shell a run for its money.

The company has been involved in large oil spills of its own, including a recent and highly destructive incident in the Niger Delta. Critics of the firm’s African operations—including those involved in suits against the company—charge that Shell has been complicit in rape, torture, murder, union-busting, abuse of foreign workers, and serious environmental crimes.

Worker abuse isn’t, however, limited to the company’s overseas facilities. Earlier this year, a former Shell employee accused the company of firing her in retaliation for reporting sexual harassment aboard an oil rig in the Gulf of Mexico. The company’s also under fire for its practices in the Arctic, lest you think the problems with its oil operations are primarily an overseas issue.

Although Seattle residents recently took to Twitter and the city’s port to protest its Arctic drilling practices, Shell’s chief executive has some snarky remarks for activists concerned about dependence on fossil fuels: “‘Fossil fuels out, renewables in’—too often, that’s what it boils down to. Yet in my view, that’s simply naive.”

Maybe if we the people of Seattle and beyond boycott at the pump, the powers at Shell will grow some miracle ears.

Hope there will be a way to force Shell to leave the city of Seattle. This is a major embarrassment. #boycottshell

After the horrific Rana Plaza factory collapse in Bangladesh, Gap was one of numerous companies to reject a proposal for better oversight over working conditions at overseas factories—and given the company’s history of past involvement with child labor and other worker abuses, it didn’t sit well. The company continues to insist that the use of child labor is a contractor problem, not one the company condones.

However, the fact that the issue continues to appear in investigative reporting about the company suggests that Gap may not be serious about halting exploitation in the supply chain.

And in 2014, the company announced that it would start manufacturing clothing in Myanmar, after sanctions were lifted on the Southeast Asian nation. According to the Huffington Post’s Kim Bhasin, Gap’s executives even argued that it was a “historic moment,” which is true, but not in the way they mean. “Myanmar has a miserable track record when it comes to workers, who are frequently underpaid and horribly mistreated,” Bhasin writes.

#GAP and #Walmart use #ChildLabor in Bangledesh. Deplorable. Haven't shopped at either in years. Please #Boycott them. Children in 2015!

Domestically, Gap has committed to raising the minimum wage for its employees, but that higher pay comes at a price. Workers don’t receive benefits along with those higher wages, and Gap is one of many retailers guilty of “on-call scheduling,” in which workers are only “notified the night before or a few hours in advance [about] whether they need to come in.”

As Bintou Kamara, the author of a 2012 Change.org petition against on-call abuse practices, told Beyond.com, “unpredictable scheduling at Abercrombie & Fitch, among other places, [makes] it difficult for employees to support themselves or even find supplemental work.” Beyond continues, “Kamara and her co-workers enjoyed schedules of up to 33 hours a week when they were first hired, but as time went by, their hours dwindled to 5 hours a week or less. Some of those hours included on-call shifts that didn’t pan out, leaving giant gaps in work from week to week.”

Residents of the Appalachians, where this energy giant strip mines, pollutes, and maintains unsafe conditions for workers, are likely already knowledgable about Alpha Natural Resources. For those outside the company’s zone of operations, the firm might be unfamiliar, but it shouldn’t be. Alpha supplies substantial amounts of coal to power plants across the United States. If your electricity comes from coal-fired sources, it’s not improbable that at least some of that coal comes from Alpha.

In 2014, Alpha received a $27.5 million fine—the largest of its kind ever—from the Environmental Protection Agency for spewing pollutants into the waterways of Kentucky, Pennsylvania, Virginia, Tennessee, and West Virginia. The company is also required to spend nearly $200 million on environmental cleanup in the region. This provides a stark contrast to the company’s “Running Right” ethos.

Those familiar with Massey Energy, who paid out a $20 million settlement with the EPA in 2008 due to widespread Clean Water Act violations,  should note that Alpha swallowed up the controversial coal giant in 2011. In negotiations with the federal government over liability for the Upper Big Branch mining disaster that occurred under Massey’s watch, the firm cut itself quite a deal.“Alpha reached a historic settlement with federal prosecutors over the Upper Big Branch disaster,” the Assocated Press reported. “It agreed to pay nearly $210 million to clear itself of criminal liability for Massey’s actions, bankroll cutting-edge safety research and technology, and wipe the slate clean with [the Mine Safety and Health Administration.”

If Massey’s CEO, Don Blankenship, was once referred to as “the dark lord of coal country” in a Rolling Stone profile, what do you call Alpha Natural Resources after acquiring his company?

Perhaps a given on any list of terrible companies in America, Koch Industries—the second largest privately held firm in the U.S.—owns numerous huge holdings in a range of industries. It’s nearly impossible to purchase commercial products that haven’t been touched by the Koch brothers, from printer paper and gasoline to agricultural products. But for those inclined to stay away from their goods, BoycottKochBrothers.com helpfully breaks down their products for you. 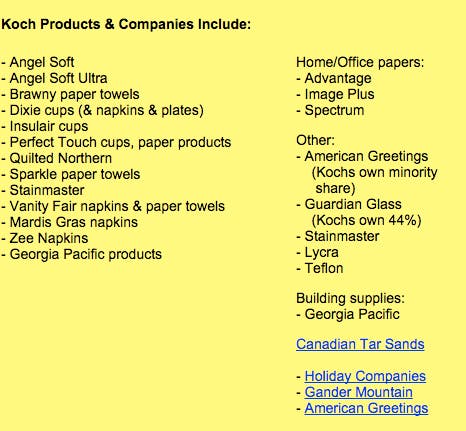 The company’s business practices are infamous, with its political activities being perhaps the most prominent. Charles and David Koch have sunk millions into legislation and political campaigns across the U.S. to favor their conservative interests, which lean toward the libertarian end of the spectrum. Causes opposed by the Koch industries include environmental regulation and health care reform, and the family has backed candidates like Scott Walker, notorious for slashing public benefits in Wisconsin.

At Rolling Stone, Tim Dickinson reports: “Under the nearly five-decade reign of CEO Charles Koch, the company has paid out record civil and criminal environmental penalties. … The volume of Koch Industries’ toxic output is staggering.”

In addition to paying out massive fines for pollution, the company also stands accused of exploiting public lands for profit, effectively handing money to the government in the form of token fines while earning billions on public ranchlands and other public leases. Perhaps unsurprisingly for a firm with libertarian leanings, Koch Industries vehemently opposes unions, to boot.

Even with Obamacare, insurance companies remain unpopular with Americans, because their dubious business practices have survived the Affordable Care Act. While such firms are more stealthy when it comes to raising premiums and avoiding payouts for covered services, they’re still at it, and Wellpoint is one of the worst. The firm even stirred the normally lethargic Centers for Medicare and Medicaid Services to give Wellpoint a firm warning on its practices—and penalties when it comes to the type of insurance plans it can offer.

Given American issues with oversight and regulation, the chances are high that you can find a reason to boycott nearly any product you pick up off the shelf. Pressuring companies, therefore, may be less effective than leaning on the government to reform from the bottom up, addressing issues like food safety, pollution standards, and worker safety.