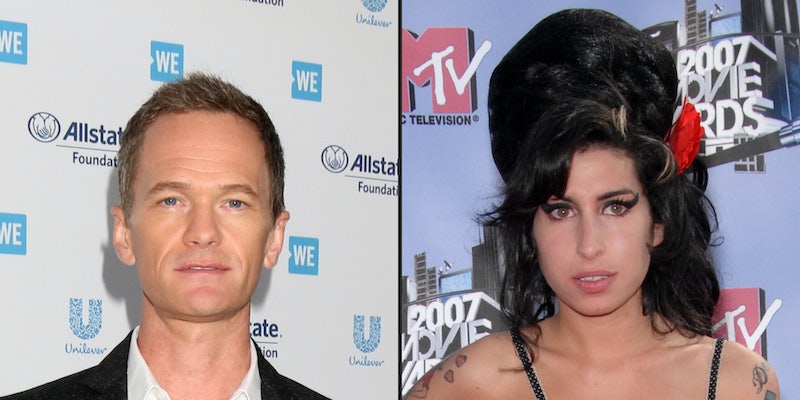 Did you know that Neil Patrick Harris’ 2011 Halloween party featured a likeness of Amy Winehouse’s corpse, just three months after her tragic death?

This cursed factoid seems to pop up every few years (months?) online. Earlier this week, a viral tweet from writer Ashley Reese, about “how many very online people over the age of 25” are finding out about this, restarted the cycle of discovery. (Warning: Someone included an image in the thread.)

“I’m not understanding why the cake is this graphic?” replied @yagirlElBell.

Oh No They Didn’t reported on the “artificial corpse” (photo included) in November 2011, just after the Halloween party. (Winehouse died in July 2011.) The photo is horrific, but it doesn’t really look like a cake. It was apparently worse: A handwritten card next to the display reads “The Corpse of Amy Winehouse,” which includes “beef ribs, pulled pork, chicken sausage in a spicy BBQ sauce.”

According to ONTD, the quickly deleted photo was originally posted to Twitter by Justin Mikita, now-husband of Modern Family star Jesse Tyler Ferguson. The party was thrown by Harris and husband David Burtka, who host yearly Halloween bashes with themed food. There’s a Flickr set featuring “zombie mermaid”-themed photos from Harris and Burtka’s 2011 party, but no photos of the food.

This fact traveled to another gossip forum, the Deuxmoi subreddit, where a majority of commenters did not know about this tasteless moment in celebrity Halloween party history. The majority of people replying to Reese’s tweet were also apparently in the dark.

Another clueless NPH moment was brought back up this week: Him not knowing who Crazy Ex-Girlfriend star Rachel Bloom was at the 2018 Tonys, or that they’ve met, or that her husband literally wrote for How I Met Your Mother. Harris later apologized.

Update May 17, 10:08am ET: In a statement to EW, Harris apologized: “A photo recently resurfaced from a Halloween-themed party my husband and I hosted 11 years ago. It was regrettable then, and it remains regrettable now. Amy Winehouse was a once-in-a-generation talent, and I’m sorry for any hurt this image caused.”