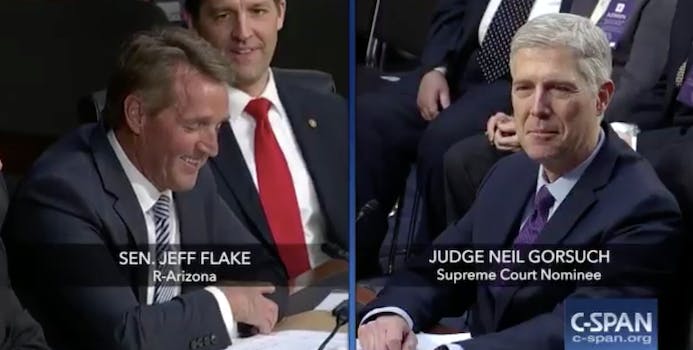 Neil Gorsuch got an AMA question in his hearing today.

Senate hearings for Supreme Court nominees are typically masterclasses in evasiveness, as pretty much anything a nominee testifying says that is the slightest bit controversial could be used as a grounds to disqualify them.

So senators will grill and grill away trying to get answers on gun rights and abortion, only to receive very tepid non-answers in response.

To, I guess, lighten things up, Sen. Jeff Flake (R-Ariz.) asked Neil Gorsuch today some questions that his family members had for him. One of them was Reddit’s most famous question.

Familiar to anyone who has ever done an AMA, Reddit always wants to know: Would you rather fight 100 duck-sized horses or one horse-sized duck?

Sen. Flake: "Would you rather fight 100 duck-sized horses or one horse-sized duck?"

He also invoked the fifth when asked if he ever wore a tank top under his judicial robes.