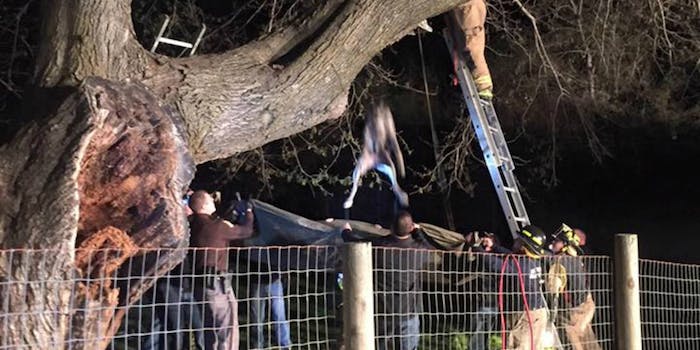 This was not kitty-in-a-tree phone call.

Here are the jobs of a small-town firefighter, in order of importance:

What most firefighters (probably) don’t count on in the course of their job is having to rescue 120-pound Great Danes from great heights. Luckily, the Plattsmouth Volunteer Fire Department in Nebraska figured out how the trick: Basically, grab the dog and toss it down to a net on the ground.

Tonight, as we were covering the Louisville district, we received a call that was far from typical. We were advised that…

Owner Wes McGuirk told KETV that his dog, Kora, probably ran up the tree while chasing a squirrel or raccoon after jumping a 5-foot fence in pursuit. But she couldn’t get himself back down, so he called for help.

“I would have never thought it was possible,” McGuirk told the TV station,

Hey, it may not be six ducklings saved from a storm drain, but it’s pretty cool nonetheless.