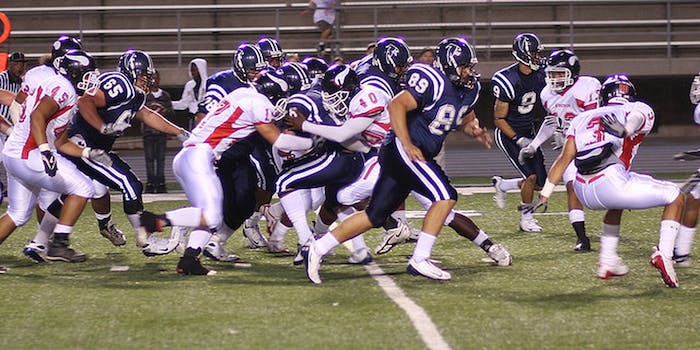 Do these two colleges exist solely to split NCAA profits?

Both schools have managed to schedule games against legitimate competition.

The College of Faith in North Carolina and University of Faith in Florida appear to be fringe institutions that do not belong to a major conference. They both pitch themselves as online schools that field football programs, and neither is accredited by any major institution. In fact, both are the sole members of the American Small College Athletic Association (ASCAA), a governing body without a website.

And, according to a post Friday by Reddit user Honestly_, the two colleges exist solely to split NCAA profits.

University of Faith lists physical measurables as criterion for admission on its online application, and recruits athletic talent on Facebook. College of Faith accepts PayPal as tuition payment.

A 2013 report from Oklahoma City’s KSBI 52 TV station revealed College of Faith is essentially a one-man startup by self-proclaimed “street preacher” and former educator Sherwyn Thomas. The school has fielded homeless Memphis-area adults and creates a team as a sort of community activism gesture of self-empowerment. Thomas serves as president, athletic director, and head coach.

Yet both schools have managed to schedule games against legitimate competition, most notably Davidson College. Per the Reddit post:

When Davidson got their first win of the season, breaking the 12-game stream (sic) with a new coach, they didn’t have much to say about the CoF, which just filled a need…no questions asked! Here are Davidson’s preview and post-game articles.

The post closes on a series of macro questions, and recent updates. The biggest questions have to do with what schools like Davidson (which has produced professional talent like NBA shooting guard Steph Curry) are doing in the ring with diploma mill startups. On paper, it seems like a symbiotic partnership; an easy win in exchange for NCAA money. And who is greenlighting this collaboration? Does the NCAA let its schools face teams with no accreditation?

Photo via Parker Knight/Flickr (CC BY 2.0)