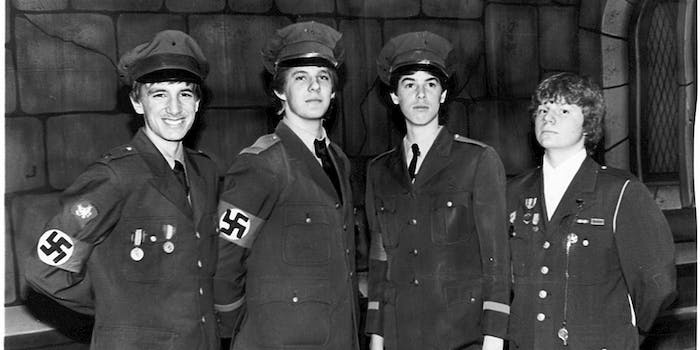 Can the Nazi Party build a ‘hipper, cooler’ brand for the digital age?

Today's Nazis are starting to look a lot like hipsters.

They’re hip! They’re cool! And if you’re not a white Anglo-Saxon Protestant, they probably hate you!

That’s right everybody, it’s the new and “improved” Nazi Party.

This week, Rolling Stone published an in-depth look at the current state of Nazism in Germany, and the results were enlightening. Written by Thomas Rogers, the article focuses especially on the shifting nature of Germany’s far, far right-wing movements, and their efforts to, in most cases, become more approachable and current. There’s even a growing trend of nazi hipsters, or “nipsters,” and they’re being called in Germany.

Rogers singles out a 30-year-old man named Patrick Schroeder, who headlines a web series for neo-Nazis with an unmanned co-host known only as “Vendetta” (who presumably took his name from V For Vendetta, an incredibly ironic decision considering the story’s anti-tyranny message), as the reason for the rise of the nipster in Germany.

Rogers observes, “Over the past year, partly because of leaders like Schroeder and partly because of the unstoppable globalization of youth culture, the hipsterification of the German neo-Nazi scene has begun to gain steam… Experts have noted that the German neo-Nazi presence on Tumblr and other social networking sites has become sleeker and more sophisticated. Neo-Nazi clothing has become more stylish and difficult to recognize. There’s even a vegan Nazi cooking show.”

In addition to Schroeder, a couple other people are attempting to change the face of nazism in Germany, the first of which is Andy Knape, who heads the youth wing of Germany’s oldest neo-Nazi political party, the National Democratic Party of Germany, or NPD. Knape, like Schroeder, “wants to give ‘nationalism’ a friendlier, cooler face (in the NPD, and many other extreme-right organizations, ‘nationalist’ often functions as a politically acceptable euphemism for ‘Nazi’). For Knape, who grew up with American pop culture, the idea of policing what young members of the scene watch or listen to is silly—he’d much rather hijack it, and use it to bring young people into the fold.”

Rogers continues, “And then, there are the Identitaeren, a two-year-old group with origins in France that has gotten widespread attention for its use of stylish viral videos to promote anti-Muslim, anti-immigrant sentiment. Although claiming to be anti-Nazi, they, like many members of the extreme right, espouse a concept called ethnopluralism, which argues that ethnic groups should only live in their respective home countries.”

The “hipsterfication” of the Nazi party is less surprising than one might think. Neo-Nazis in general been popping up more and more across Eastern Germany for several years. And even before “nipsters” began to adopt hipster fashion, a group called the Autonomous Nationalists (AN), “began aping the look of the extreme left—black hoodies, black pants and even Che Guevara T-shirts (with the words ‘Not only Che would be with us’)—and incorporating traditionally progressive issues like environmentalism and animal rights into neo-Nazi ideology.”

In America, the presence of Nazism has grown significantly thanks to a high-profile music scene (Rogers notes that the new factions of Nazism in Germany have gone so far as to reappropriate hip-hop for their cause.) And of course, there was also the now infamous “grammar Nazi” tweet that the official American Nazi Party released last month, a joke that many found humorous, if not a little disturbing.

All of this begs the question, what exactly are these Nazi groups getting at? Could it really be that Nazis are giving themselves a makeover?

The simple answer is yes. These new iterations of Nazism are, if not a kinder and gentler riff on hatred, a more modern and self-aware one. But Germany and America’s Nazi parties aren’t doing anything very new—or anything very surprising. In fact, what they’re really doing amounts to a fairly straightforward case of rebranding.

According to Entrepreneur.com, most companies have historically tried to change their image with either a “partial rebrand” or a “total rebrand.” The website’s John Williams says that partial rebranding is done when a brand has been “firmly established” but wishes to do some “tweaking.” A company will attempt such a feat their brand is “outdated or needs to be refreshed due to the addition of new products or services.” For example, Aunt Jemima kept the same character but Quaker Oats “updated” her to suit the times.

The “total rebrand,” Williams says, comes into play for companies who’ve been through mergers, who “have failed to establish a brand” to begin with, or who’ve experienced a scandal.

Thinking about them in terms of this ideology, current Nazis’ rebranding efforts are somewhere in between the partial and the total rebrand. On the one hand, their message remains firmly established; you can only tweak intolerance so much. But on the other, the Nazis very existence is a scandal, and in the decades since WWII, many different versions of the party have come together and fallen apart, in an attempt to occupy what they see as a vacancy in modern society.

As it happens, German Nazis had plenty of templates for rebranding based on their own experiences, too, like when fashion company Lonsdale tried to distance themselves from Nazi association. As Rogers tells it, “Geurt Schotsman, the politically-progressive owner of the brand’s German license, has been trying to rid himself of the neo-Nazi association for over a decade—with a campaign called ‘Lonsdale Loves All Colours,’ a sponsorship of the Cologne Gay Pride parade and, this spring, official support of two left-wing German football clubs, Leipzig Roter Stern and SV Babelsberg.“

On top of that, Rogers mentions German clothing label Thor Steinar, who, “was brought to court for its logo, which looked like a banned neo-Nazi symbol… It later rebranded and in 2009 was sold to a company based in Dubai.”

Also working in the Nazis favor? They aren’t the first controversial organization to attempt rebranding efforts. For instance, cigarette companies have had to continue to shift their image among widespread knowledge about the harmful effects of their product. The difference, to state it plainly, is that cigarettes are a product that people buy knowing it will harm them. Nazism pushes a product that will harm others. Thankfully, this continues to be a tough sell.

However, the newest rebranding efforts on the part of today’s Nazis have coincided with a suspicious level of unrest in Europe, as Nazi rebranding has taken place alongside the success of several far-right (although not as far right as the actual Nazi Party) political parties in Europe. And in Germany specifically, violent crimes against foreigners are up a staggering 20% from the year before.

Cynthia Miller-Idriss, an associate professor at American University who has been studying Berlin’s extreme-right youth, links the problem to social media. “The social media space,” says Miller-Idriss, “allows young people to have different expressions of their identities in different places… This generation of youth likes the idea of having more control over their own identity. They’ve realized your style doesn’t have to be connected to your ideology.”

The good news? The heyday of the nipster is likely to be short, if, as Rogers attests to, Germany is as frustrated by hipster culture as much as everyone else does. Rogers confirms this:“In 2012, the Daily Welt heralded the ‘hipster’ as Germany’s ‘new object of hate’ and just this February, the country’s biggest tabloid, Bild, offered a guide to ‘hipster types’ for its readers.”

And despite Miller-Idriss’ claims about the dangers of Nazis on the Internet, it’s been proven that the digital age usually makes rebranding tougher. Business Insider published a companion piece to it’s one on successful rebranding efforts, about instances where rebranding failed miserably. Among these were Radioshack’s shortening of their name to “The Shack,” Comcast’s decision to call themselves “Xfinity” in several markets, and Netflix’s separation of their streaming service from their mail service into a separate entity called “Qwikster.”

But the most disastrous of all was the Sci-Fi network’s switch to SyFy. As Harrison Jacobs reports it, “To pick the name, it asked tech-savvy 18- to 34-year-olds (its predominant demographic) for feedback, who told them that SyFy was how someone would text the name. The company bought in, but it was ill-advised. It turns out “syfy” is a slang term for the STD syphilis. The new name association was ridiculed, and many longtime fans decried the name change.”

Considering the fine line between advertising and propaganda, the Nazi movement’s decision to rebrand was inevitable. But that doesn’t mean it will work in the way they want it to. The truth of rebranding is that the people who were going to buy the product anyway are still going to buy it whether rebranding happens are not. Yes, there will always be a certain amount of people who are extra susceptible to rebranding, but in all likelihood, these are the types singularly impressionable minds who Nazis tend to go after anyway.

Nonetheless, there is a certain danger in failing to take Nazism, if not Nazis themselves, seriously. Silly videos and funny tweets aside, hatred remains hatred, no matter how ridiculous those preaching it may seem. Today, Hitler is either a joke or a talking point; a popular Internet meme or a political misappropriation. But the real man was not so easily defined.

So the next time you think about Nazis, remember to think not just on the laughability of Germany’s nipsters, remember to think on Johann Breyer, an American-born 89-year-old Nazi, currently awaiting extradition to Germany from Philadelphia. Breyer served as a guard at Auschwitz, the most brutal of the German concentration camps.

Think about Breyer, and remember that Nazis aren’t so funny.