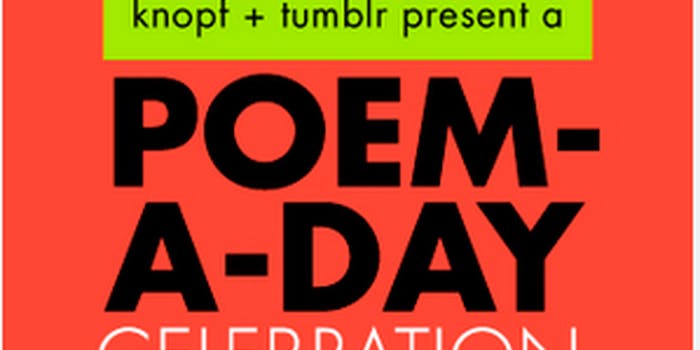 Celebrate National Poetry Month with a poem a day—or submit your own.

If you are looking for a way to celebrate National Poetry Month without picking up something really icky—you know, like a book—Tumblr has a high-tech solution.

April 1, Tumblr unveiled a special blog titled Celebrate Poetry, in conjunction with Albert A. Knopf Books. For the month of April, the blog will showcase poems from Knopf-backed writers and rando Tumblr users, who are encouraged to submit their work.

Although we’re only three days into April, five poems have already been posted (making us wonder if the blog’s creator forgot to add an “s” to somewhere in the “Poem-A-Day” moniker). Regardless, the mix of poems so far include two poems from established writers (Jack Gilbert, Dan Chiasson) and two pieces of work from Tumblr users.

The first poem, posted Sunday, was Jack Gilbert’s “Searching for Pittsburgh.” The Pittsburgh-born poet is now in his late eighties and Tumblr picked the poem in honor of Gilbert’s origins. Gilbert’s poem only racked up 12 notes, but the second poem posted (also Sunday), from Tumblr user Karolina Manko, has more than 70 notes.

Tumblr will select poets that resonate most with the community from the submissions to the blog and honor them at an event in New York at the end of April. At the event, two New York City-based writers will be picked to read their work, and other poems will be projected on a screen—just like how people enjoyed E.E. Cummings’s work in the early 1900s.

Budding writers who want to be featured have until April 30 to submit their poems. That should be long enough for us to figure out words that rhyme with “reblog.”