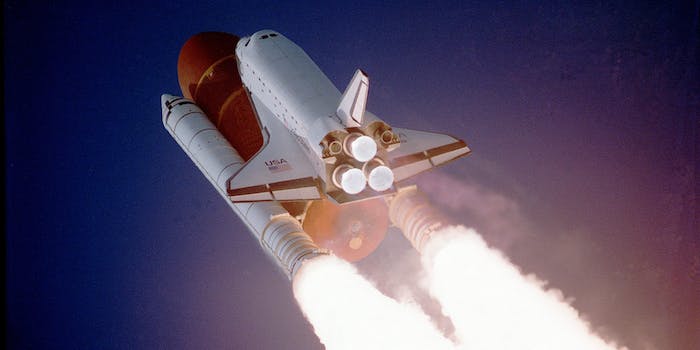 What the Falcon 9 explosion says about NASA's relationship with Silicon Valley.

This weekend, a rocket blew up.

There was a time when that sentence would have been major news. However, for those invested in the partnership between NASA and SpaceX, exploding rockets are sadly becoming a fairly common occurrence. Enter the latest Falcon 9, the sixth rocket SpaceX has launched this year only to explode shortly thereafter. With a livestream broadcasting the event to the world, the Internet watched in either horror, amusement, or boredom on Sunday as the rocket met its unfortunate fate.

Designed to deliver a “Dragon” capsule to the International Space Station, Falcon 9 was a part of what is now a routine cargo resupply mission. While the company has successfully managed to lift its supply capsules into orbit, it has yet to master the more difficult task of getting a reusable rocket back down to safety on a barge in the middle of the ocean.

No one is disputing the fact that this is ridiculously hard—it’s a wholly unprecedented feat. But given SpaceX’s $1.6 billion contract with NASA, the company’s latest mishap presents bigger questions about the future of space travel. The most important one: What is the role of Silicon Valley in the future of the space race?

Despite decreased U.S. interest in space exploration over the past few decades, many are still hopeful about its possibilities. President Obama isn’t likely to devote much time to it during the remainder of his presidency. But between charismatic figures like Neil Degrasse Tyson, and renewed interest through Hollywood films like The Martian, Tomorrowland, Interstellar, and Gravity, you might even say that space is having a pop cultural renaissance.

“The space program still embodies the best of the American spirit,” writes the Orlando Sentinel’s Beth Kassab. “For all of its mistakes along the way, the space program today has just as much chutzpah as ever. We have people such as [Elon] Musk, who wasn’t satisfied making a fortune off PayPal or founding Tesla. Next he wants to colonize Mars.”

Of course, we can’t forget Elon Musk. It’s important to remember that as the founder of SpaceX, the embarrassment of incidents like Sunday’s Falcon 9 explosion fall squarely on the Tesla CEO’s shoulders.

Yet there are many like Kassab who, in spite of SpaceX’s recent failures, continue to sing Musk’s praise as a leader in space travel.

“Space flight is like the venture capital industry in reverse: Most launches succeed, but a prominent few explode spectacularly, just as SpaceX’s latest attempt did on Sunday,” writes Robert Cyran for Reuters. “Such mishaps, though, are par for the course in the space business, and Elon Musk’s company remains on the right trajectory.”

However, regardless of trajectory, Cyran hits on a fundamental difference between NASA and Silicon Valley here: Space flight is not like venture capitalism, and its risks are potentially fatal. And Elon Musk’s heart is not automatically wired for space.

Musk initially pointed to issues with the Falcon 9’s liquid oxygen tank as a likely reason for its explosion. But NASA warned against jumping to conclusions, eventually forcing Musk himself to admit that the cause is going to be incredibly difficult to determine.

His reaction to the recent Falcon 9 explosion demonstrates just how precarious the position of Musk, and anyone else from Silicon Valley, really is when it comes to space travel. It comes down to the difference between Old Space and New Space.

Old Space… is slow, bureaucratic, government-directed, completely top-down. Old Space is NASA, cautious and halting, supervising every project down to the last thousand-dollar widget. Old Space is Boeing, Lockheed, Northrop Grumman. Old Space coasts on the glory of the Apollo era and isn’t entirely sure what to do next.

New Space is the opposite of all that. It’s wild. It’s commercial, bootstrapping, imaginative, right up to the point of being… delusional.

This makes the relationship between NASA and Silicon Valley both incredibly important—and somewhat dangerous. After Congress slashed its budget by $300 million, NASA is now forced to rely on efforts from Russia and the ingenuity of companies like SpaceX to get much-needed supplies to the ISS.

Previous attempts on the part of SpaceX to deliver supplies to the ISS have been successful, but with Sunday’s Falcon 9 disaster, the astronauts on board now only have several months of supplies left.

The situation is not as dire as it may sound, as several other supply missions are in the works, but from a long-term perspective that doesn’t make the failure of SpaceX in this instance any less critical.

The latest mishaps of SpaceX present bigger questions about the future of space travel, which have yet to be answered.

“The explosion will raise questions about NASA’s bold plan to rely so heavily on contractors, even though SpaceX had a track record of six successful official missions to the station and one test flight going into Sunday,” states the Post’s Christian Davenport.

As Musk himself knows, there’s little margin for error. “I’m under a huge amount of strain,” he said. “There’s no two ways about it. I’m trying to do a whole lot of things simultaneously. It’s tough when things are going smoothly, and it’s really tough when things are not. The thing with the rocket is, the passing grade is 100 percent. You can’t issue a recall or do a patch. You either get it all right or you’re screwed.”

The problem is that innovation doesn’t work the same way in Silicon Valley as it does in space travel. In Silicon Valley, it’s all about who gets there first. While that proved true for America’s race to the moon, the years since have been less of a sprint than a distance marathon, as much about endurance as it is speed. While NASA itself struggled with keeping up its pace—during decades of defunding and public disinterest—it will prove an even greater challenge for Silicon Valley.

In Silicon Valley, the race is won or lost on the instant gratification of innovation—a constant stream of what’s new. It’s about branding, image, and timing as much as implementation of ideas. However, NASA focuses heavily on implementation, waiting until it is 100 percent ready for launch. This is the way you have to operate when lives literally hang in the balance.

And this is why an alliance with Silicon Valley also presents some cause for concern.

“Life in the New Space universe isn’t a breeze,” declares Achenbach. “Projects get delayed. Spaceships remain in their hangars, not ready for space. Wall Street investors may drop in to visit, but the big institutional money isn’t ready to gamble on New Space.”

Of course, it’s that gamble that will continue to be a concern. As the failure of Sunday’s Falcon 9 launch emphatically demonstrated, with space travel, you have to be able to put your money where your mouth is.

Photo via reynemedia/Flickr (CC BY 2.0)