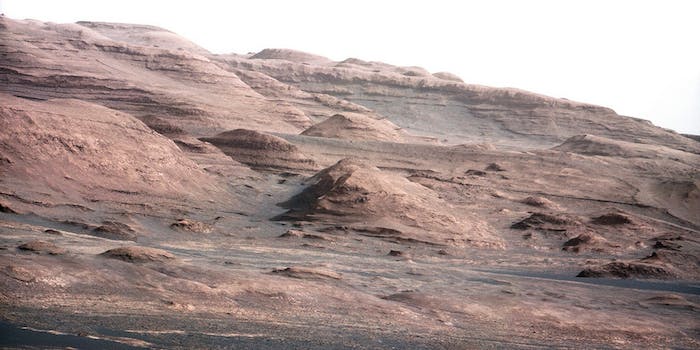 This is why you're having déjà vu.

If you had Internet access on Monday, you probably heard something about water on Mars. It’s a legitimately exciting scientific development! The first solid proof of running water on another planet! There’s no reason to be cynical about that, so keep that in mind as you read the rest of this article.

NASA touted this discovery with their PR hype machine. They started by teasing a major announcement in regards to Martian research (aliens?), and then, a couple days later, revealed images of running water (man, it’s never aliens, is it.) Which, again, is totally cool. The problem is, we’ve heard NASA say they’ve discovered water on Mars a whole bunch of times already. Here’s a rundown of previous Martian water reveals.

1971: That’s the year we first had an inkling there might be water on Mars, when a space probe with about the technological complexity of a calculator noticed the Valles Marineris, a system of canyons that seemed to have formed via some sort of flowing liquid. No physical water, sure, but we were on the right track just one year after The Beatles broke up.

Ah yes, Viking 1 and Viking 2, the probes and landers that examined the Red Planet for a number of years in the late ’70s and early ’80s. They noticed gigantic river valleys, evidence of rain, and a bunch of other proof that at some point or another, Mars played host to some actual running water.

This is sort of the big one that makes an announcement like yesterday feel a little anti-climatic. In 2003, NASA announced that their orbiting Odyssey project had discovered, and I quote, “enough ice underneath the surface to fill Lake Michigan twice.” That’s… so much water! And we found it over 10 years ago.

In 2008, the Phoenix lander drilled down a couple inches into the Martian soil and totally “discovered” the previously discovered ice, thus confirming the Odyssey’s theory. There was a bunch of ice under Mars! And Barack Obama was about to be elected president! 2008 sure was great!

Since 2005, the Mars Reconnaissance Orbiter has been sending back evidence of sustained precipitation on the planet, as well as photos of ice-encrusted craters. It also discovered a stranger version of Martian rain where water vapor enters the atmosphere, attaches itself to dust particles, and brings them back down to the ground in certain seasons.

Here’s its latest report of weather on the Martian surface:

Diffuse water-ice cloud activity continued in the equatorial latitudes this past week as the aphelion cloud-belt developed. Each sol, dust activity and optically thick water-ice clouds were observed along the receding north polar ice cap edge.

And that’s sort of my issue with yesterday! I get that NASA is looking for more funding, and this sort of red-carpet rollout makes them feel important, and I totally respect that. I guess I just wished they saved it for the stuff where my initial reaction isn’t “didn’t we already know that?”

But anyway, congratulations on the discovery, NASA—you guys are so unimaginably more brilliant than me it’s not even worth talking about.