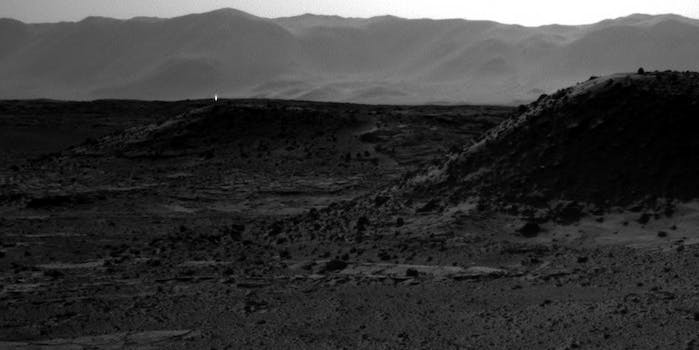 It appears the search for intelligent life on other planets will not end with some little green Martian singing, “This little light of mine, I’m gonna let it shine.” At least, not this week.

NASA’s Curiosity rover caused a minor stir this week with photos it captured on Mars that appear to show a solitary bright light emanating from the stony surface of the Red Planet. Websites dedicated to searching for extraterrestrial life quickly latched on to the photos and began developing theories.

“This could indicate there there is intelligent life below the ground and uses (sic) light as we do,” wrote Scott Warring of UFO Sightings Daily. “This is not a glare from the sun, nor is it an artifact of the photo process. Look closely at the bottom of the light. It has a very flat surface giving us 100% indiction (sic) it is from the surface.”

While scoping out its new study area called “the Kimberley” last week, Curiosity captured the two images that appear to show the light with its right navigational camera on consecutive days—April 2 and 3. The light is not present in two images (here and here) taken nearly simultaneously by the rover’s left navigational cam.

Alas, NASA tells the Daily Dot that the photos are really nothing extraordinary.

“One possibility is that the light is the glint from a rock surface reflecting the sun,” Justin Maki, an imaging scientist at NASA’s Jet Propulsion Laboratory (JPL), said in an email. “When these images were taken each day, the sun was in the same direction as the bright spot, west-northwest from the rover, and relatively low in the sky.”

In case there’s any remaining doubt about whether or not image actually shows artificial light, Doug Ellison, a visualization producer for JPL, spent a significant portion of Tuesday shooting down theorists on Twitter.

@DailyGrail The fact that it’s in one ‘eye’ but not the other means it’s an imaging artifact and not a real ‘thing’ in the terrain. Period.

Representatives from JPL did not respond when asked if they planned to send Curiosity to take a closer look, but that seems unlikely in light of their explanation of the images.