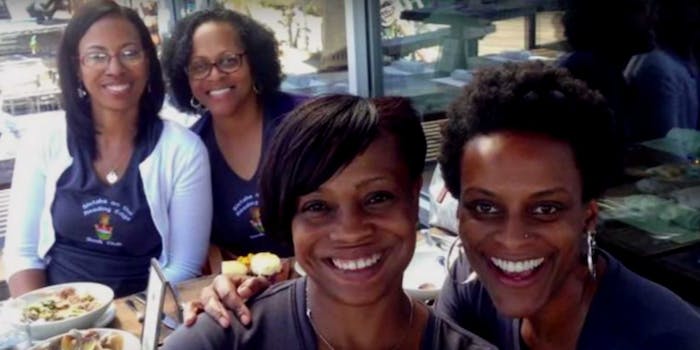 How #LaughingWhileBlack reveals an ugly truth about white privilege

African Americans do the darndest things. They dare drive around casually in their own neighborhoods; walk through airports with big, natural hairstyles; and believe it or not, they even enjoy a few chuckles over drinks. When a white person does anything similar, as anyone typically does, there’s a good chance no one would even think twice about it. But for black people, any of these common, everyday activities could mean a run-in with the police—usually because it triggers the racial biases of white people.

Take, for example, a wine train headed to Napa Valley last weekend, where a black women’s book club experienced this troubling double-standard firsthand. The “Sistahs on the Reading Edge” gathered for a friendly get-together to enjoy Wine Country, dressed in matching grey shirts with smiles to boot. Like anyone else aboard the train, the ladies enjoyed some wine, a chance to whet their appetites before luxuriating at any number of vineyards.

But soon after their journey began, staff members asked them to quiet down, alleging they were “laughing too loud.” They hadn’t even reached the halfway point in their trip, until staff members stopped the train, with police officers waiting outside to escort them back to the starting point. The women weren’t drunk and disorderly, nor were they disrespectful to staff members. The Sistahs were enjoying a weekend excursion, and it all got derailed because they made one grave mistake: They got caught #LaughingWhileBlack.

It reveals yet another alternate reality in America, where white people police something as simple as the self-expression of their black counterparts—with dire consequences.

#STORYTIME: 10 women were #LaughingWhileBlack on Napa Valley Wine Train. They were removed. With police escorts. pic.twitter.com/k8lQ8DqAXI

Way to ruin your brand @winetrain. Where's your next racist stop? 1958? #laughingwhileblack

For all the people who keep saying: "It's not racism!" or "Well, they were loud so…" #laughingwhileblack pic.twitter.com/qM5pbcjL3M

The initial response from Napa Valley Wine Train underscored the contempt for this group of women, one harbored by staff and riders alike. While acknowledging that they serve appetizers and alcohol aboard the train, a company spokesperson told the Associated Press that “the book club was clearly fun-loving, boisterous, and loud enough that it affected the experience of some of the passengers who were in the same car, who complained to staff.”

Of course, the vast majority of the staff and riders just happened to be white, whereas the “loud” book club was composed solely of black women.

When white people want to instill a specific kind of social order, they can usually enjoy the privilege of calling for a manager who looks like them, and shares some of their own cultural beliefs.

It may be tempting to assume that race doesn’t play a factor here. After all, if anyone else disregarded the orders from any business staff, it would come as no surprise when they are eventually asked to leave. But the racial and cultural differences at play in this situation deserve attention—because there was no forewarning or written rule mandating relative silence on the Napa Valley Wine Train. (And who could expect such a thing where alcohol is being served? Most American bars and liquor-serving businesses aren’t exactly libraries.)

However, as numerous incidents have shown, when white people want to instill a specific kind of social order—be it standards on emotional expression, ethnic hairstyles, or even clothing styles—they can usually enjoy the privilege of calling for a manager who looks like them and shares their cultural beliefs. This is how a minor issue—that really isn’t an issue at all—leads to being ejected from the environment or, worse, calling for police backup.

#laughingwhileblack just some history to remind you that #Racism is institutional pic.twitter.com/67lxZ0kuQt

When it comes to emotional expression, black people somehow get more attention for being “loud” than any other group. Be it riding the train, or having a conversation while walking down the street, the assessment of the situation differs when skin shades get darker. According to an online post from a fellow, white rider on the Napa Valley Wine Train, other white patrons exhibited the same behavior as the Sistahs, but the staff only took serious exception to what a group of black women did.

It underscores just how much humanity is afforded to white people, whereas people of color’s self-expressions are understood as either threatening or disruptive. Just prior to revelations that WWE legend Hulk Hogan has a racism problem all his own, a chain of his restaurants came under fire for allegedly enforcing a racialized dress code. As TMZ reported last September, the posted signs at Hogan’s Beach (a chain with a casual bar vibe) included a litany of no-no’s, which included:

When TMZ spoke with a restaurant employee, they said the dress code was only strictly enforced during concert events: “When we asked him about wearing oversized jewelry, he said, ‘I don’t want to sound stereotypical…’ and then he trailed off.” Somehow, the employee knew precisely the kind of person the dress code was targeting, even if many of those styles have become mainstream. Loud, in this context, is about culture—and because a cultural context perceived as “black” isn’t appealing to a rich white man, it meant you’d be barred from entry.

The idea of being “loud” while expressing oneself also gets racialized—no matter where black people travel. A few years back, in the relatively affluent Chicago neighborhood of Lakeview, young LGBT people (mostly black and Latino) commuting to the neighborhood for essential, friendly community services were subject to police harassment at the behest of the mostly white homeowners and renters. Why? Because they were groups of “loud” kids inhabiting public spaces.

However, that same neighborhood is home to the Chicago Cubs and a strip of sports bars, which also is subject to some of the city’s most tumultuous sports-related riots. That’s not to mention the hordes of drunken white bros who often yell loudly at the wee hours of the night, yet don’t get subject to the same police treatment as their younger black and brown counterparts.

Beyond public settings, there’s also the convenient trope of black people being “loud” in movie theaters—talking back at the screen at any given moment. It’s a stereotype lambasted in the 2000 horror-comedy film Scary Movie, where the character Brenda (played by Regina Hall) gets killed by the villain because her constant outbursts annoy him and fellow patrons to no end. She dies from multiple stab wounds, even from some of her fellow patrons, all of whom applaud the masked murderer for saving their moviegoing experience.

What happened on the Napa Valley Wine Train is more than fiction, however, because any Google search for “loud black people in movie theaters” reveals Yahoo Answers queries, Reddit threads, and numerous blog posts on the topic.

On one particularly active r/Movies discussion from last year, for example, more than 285 comments addressed the question of whether or not “mid-movie cheering and egging along of the characters” was simply an American cultural trend. The asker recently relocated to the U.K., where the fairly frequent moviegoer only heard, at the most, an involuntary gasp or a laugh at gutbusting moments. But the commenters got a lot more specific, with many of them either using coded language or even direct references to black people and their tendency to be “loud” at the movies.

The practice amongst blacks may very well be rooted in cultural and musical traditions—such as the antiphonal nature of call-and-response singing omnipresent in Gospel music. However, as theatre owner Alisa Starks told the Grio in 2010, her patrons on Chicago’s South Side are 90 percent black and many talk back at the screen, yet this type of “loudness” isn’t solely a black thing. “Movies, good movies,” Starks said, “are designed to invoke emotion so people [respond but] that is not unique to African-Americans or Latinos or any other group. All groups can find themselves laughing or crying at the movies.”

Black people get the worst rap for something their other counterparts also do at the movies.

Still, though, black people get the worst rap for something their other counterparts also do at the movies—something that experts say is moreso a matter of perception and stereotyping than actual reality. Speaking with the Grio, Dr. Akil Houston, an assistant professor in the African-American Studies program at Ohio University, noted a compelling reason why black people get unfairly policed for common modes of self-expression.

“Even though we may go into a theater,” Houston said, “we don’t really know any of these people in a dark room but when we encounter different people, different triggers exist to enable stereotypes. If you are in a marginalized group, your behavior is [seen as] group behavior, [but] if you’re in the dominant group, your behavior could be individual.”

When white folks hatred runs so deep our joy bothers them….. #LaughingWhileBlack occurs

Makes me want to start a book club only where we only read comedies and laugh in front of white women. #laughingwhileblack

Even though the top executive at the Napa Valley Wine Train apologized for the staff being “100 percent in the wrong,” the damage has already been done. The Sistahs may have a complimentary (entire) train car all for their taking in the future, and the company says it will ensure all staff members undergo diversity training. But even in their apology letter, they highlight that the staff should have seated them in an area where they could laugh, nor did they note any expectation of hosting an “especially boisterous group.”

In other words, let the “loud” black people be loud—as long as they’re off by themselves, separated from white people whose racial biases run so deeply and insidiously that even a black person’s laughter makes them uncomfortable.

Photo via The Lip TV/YouTube