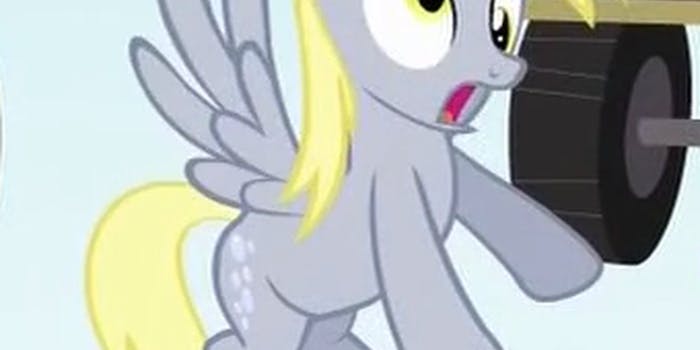 A message from a My Little Pony: Friendship is Magic staff writer has once again restored peace to the land of the bronies.

For several weeks, the friendship- and kindness-loving community has been thrust into turmoil over Derpy Hooves, a fan-conceived character-turned-canon and back again.

In October 2010, some fans fixated on a background character in the first episode who, through a Flash animation error, appeared to have googly eyes. The community instantly dubbed her Derpy Hooves, developing a backstory for her as a “mail mare” who loves muffins.

The story would have ended there, if not for Hasbro’s recognition of the character. More and more frequently, the show’s animators would include Derpy in the background of an episode as a nod to brony fans. This practice climaxed in January during an episode titled, “The Last Roundup,” in which Derpy had a speaking role.

When the creators abruptly altered the show to take out Derpy’s name and slow, goofy voice, bronies bucked back. The community, known for its tolerance, reared its ugly side—pointing fingers at one another, Hasbro, and iTunes.

Now, a response from Amy Keating Rogers, the writer for “The Last Roundup” episode, has finally quelled the turmoil. Rogers wrote to Daniel, the blogger behind Save Derpy Hooves, who sent her response to the largest brony news site, Equestria Daily, for all to read. As it turned out, Rogers had a very personal reason for wanting Derpy’s name and voice altered.

Rogers said she was asked to name the gray pony Derpy as a nod to the show’s fans. However, she didn’t know that the word could also mean “retarded” until she looked it up:

“Now, you have to realize that reading that made my heart sink. My son Soren (of Soarin’ fame) is severely disabled. We do not use the word ‘retarded’ in our house because it really has become an offensive slur. And while I knew that it was only a minority of people that defined ‘derpy’ this way, it still upset me that I was the writer that put that name out there.”

Rogers added that, while she only got a handful of emails from offended viewers, she got “about 200 positive ones.” However, the ultimate decision was up to Hasbro:

“I am sure they weighed what was best for the MLP brand, the show, the network, and they may have even weighed in my personal situation. Maybe they wanted to spare me from getting anymore more hate mail and people calling me offensive names. It may have been only 10 emails, but each one made me feel absolutely horrible.”

In the end, Derpy’s name has been removed, and her voice sounds more ditzy than dumb. And finally, the majority of commenters on Equestria Daily are okay with this decision. While many voiced their disagreement overall, they’re happy to have received an official response.

“I’m really glad she replied to my email,” commented a user who may have been Daniel. “I assumed she was going to give me the ‘We can’t discuss it’ line. This is why I love the creative staff, they treat us like real people.”

“[A]ll of us bronies should thank Mrs. Rogers here,” commented Ariathina. “She has brought back to our world what should have never left Equestria. She has banished the hate and anger and brought back our peace and order.”