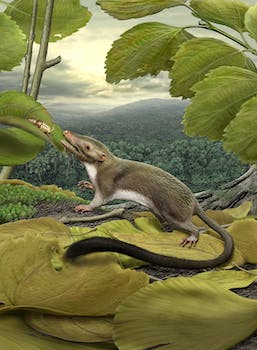 The theoretical species from which all placental mammals—that includes humans—descended needs a name.

One of the grand things about crowdsourcing is how it allows us to take part in things we love. And if what you love is our “hypothetical placental ancestor” (and let’s be frank, who doesn’t?) your dream is about to come true.

The American Museum of Natural History, in conjunction with Radiolab, is crowdsourcing a name for that mammal to which we (and by “we,” we mean whales and armadillos and the Welsh) can all trace our evolutionary ancestry.

This animal is the proto-Indo-European of mammals. That is, the “ancestor” didn’t leave behind a fossil record. It is, instead, a surmise.

The… thingee was posited in a study published in Science by a group of scientists, including representatives of the AMNH, which used a huge genetic and zoological dataset, along with known evolutionary events and trends, to give this airy nothingness a local habitation, but not a name.

Afterward, the scientists employed an application called Morphobank to tart up the image of an animal that looks like a bit like a toothy squirrel-rat that lived during the Paleocene area, about 66 million years ago, just post-dinosaur, and whose arrival heralded the beginning of the primacy of mammals.

As Rebecca Rosen noted in The Atlantic, because… thingee “was discovered through computer code and not fossil evidence, it doesn’t get an official name,” i.e., one with the Latin all in it. But both “hypothetical placental ancestor” and… thingee fall a bit short. So, Radiolab is taking suggestions for a name on its website and via Twitter, with the hashtag #nameyourancestor.

Once the suggestion period ends, on March 5, Radiolab and the American Museum of Natural History, will selected the finalists to be voted on by the hoi polloi in a series of “March Madness” bracket elimination rounds, and the winner will be… thingee-in-perpetuity.

The judges, as it were, are looking for “(s)omething that does for this shrew doppelgänger what Lucy did for Australopithecus. We need to transform this placenta mammal the way “King Tut” helped “Heru Nebu Wetches Khau Sehotep Neteru” (“He who Wears the Crowns and Satisfies the Gods”) become a household name.”

The scientists want to remind you of two things. First, the common ancestor is a species and contains both males and females; and second, as there is no fossil specimen associated with the common ancestor, don’t give it a Linnaean (scientific) name.

Personally, I’m torn between “Heru Nebu Wetches Khau Sehotep Neteru,” “Lyle Alzado” and “The Crushinator.” But you follow your bliss.

Illustration via the Carl Buell/American Museum of Natural History