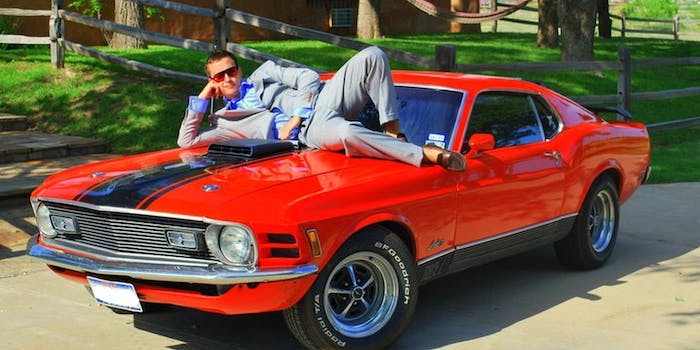 A man restored a 1970 Ford Mach 1 Mustang and redditors approve (despite, or maybe because of his interesting user name.)

Most people find joy in buying a nice new car. Other people, like redditor CatastrophicClitoris, like building their rides from scratch.

On Thursday, CatastrophicClitoris posted a before and after photo of a 1970 Ford Mach 1 Mustang that took him and his father two years to restore. The post was a massive hit on Reddit where it collected more than 1,700 comments and earned a spot on its front page.

“Upvoting for a man rolling up he sleeves and getting shit done,” wrote P5i10cYBiN.

CatastrophicClitoris and his father bought the car in Wichita, Kan., for $3,000. The muscle car was rusted and broken, a shadow of what it once used to be. With no car restoration experience to draw upon, CatastrophicClitoris relied on his fathers knowledge of engines, the TV show “Overhaulin,” online forums and car manuals to help restore it.

“I still have some good scars from engine work and welding slag dripping on me,” wrote CatastrophicClitoris. “That car gave me some scars. Bitches love scars.”

The interior work, upholstery, minor body work and assembly were all done by CatastrophicClitoris and his father. The engine overhaul, paint job and transmission work were done by a car shop. All in all, the entire restoration cost about $20,000, CatastrophicClitoris wrote. And he wouldn’t have had it any other way.

“I love rumbling down the street and getting thumbs up after thumbs up,” he wrote.“If you have any interest in this kind of undertaking, be prepared to spend all day Saturday and Sunday every weekend working on it for a few years, but damn it is rewarding.”

Incidentally CastastrophicClitoris said in an email that his user name “doesn’t mean anything.  I think it’s a badge of honor to sport a shock-and-awe, and hopefully funny, username.

“People remember you that way.”