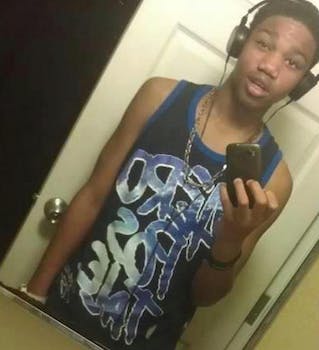 Murder suspect sent Facebook apology to victim after his death

A teenager accused of murdering a 13-year-old boy may have forecast his fate in a Facebook message sent to the victim the day after his death.

A teenager accused of murdering a 13-year-old boy may have forecast his fate in a Facebook message sent to the victim the day after his death.

Kashawn Hines is currently the chief suspect in the murder of Lamonee Johnson-Chisolm, a child of Newport News, Va., who was 13 years old when he was shot in the back and killed last November.

Hines’ hearing date will be determined in April, but he’s already up against a tough assembly of evidence: According to an affidavit for search warrants submitted to the Newport News circuit court,  the 15-year-old sent a Facebook message to the deceased apologizing for his actions and casting away intentions the day after he died.

Investigators have reported that Hines sent a Facebook message on Nov. 19 that explained how “He did not mean to kill [Johnson-Chisolm] and that he only meant to scare him by shooting.

“Kashawn also stated he was sorry for killing Lamonee because they used to be friends,” investigators reported to Virginia’s WTKR.

The investigators also said that they found “several messages to Lamonee from several various individuals who were threatening to kill him” and “several threatening messages from subjects posted before and after his death.”

The discovery may help bring quicker closure to the case, but it does nothing to settle the heart of Quintonia Chisolm, now five months removed from burying her son.

“I just stared at it for a while,” she said in response to the Facebook messages. “His apologies and his I-didn’t-mean-to’s mean nothing. They don’t bring Lamonee back. It doesn’t change the fact that he changed so many lives by doing something so stupid.

“Monee was 13. [Hines is] 15. He celebrated his birthday after [the murder]. Monee didn’t. I’m not bitter or mad because he’s living and Monee isn’t. I’m just saying hold him responsible for what he did.”

Earlier this month, a judge in Newport News ruled that Hines would be tried as an adult when he returns to court in April.