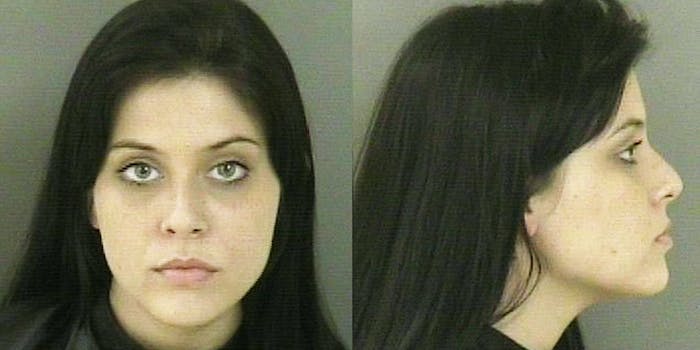 Some women use the exposure to help themselves post bail.

From Jeremy “hot felon” Meeks to “Khaleesi of the Hood” prison bae, for years now, the internet has been fascinated by mugshots of beautiful alleged criminals. It’s like, how can anyone so good-looking be charged with committing a crime?! You’d think beauty is only skin deep or something! At any rate, it’s this phenomenon that we have to thank for the “Mugshawtys” Twitter account, which has been actively seeking out mugshot hotties since March of 2017.

“Hope bae gets bail,” proclaims the Mugshawtys bio, and nearly three years later, the feed is still going as strong as ever. Take, for example, just a sampling of recent posts featuring inarguably attractive women charged with offenses ranging from marijuana possession and destruction of property to even attempted murder and identical twins engaging in prostitution. Allegedly!

And yes, there will be face tattoos.

engaging in prostitution (twins not the same girl) pic.twitter.com/4j2aY3LvrC

And a special shoutout to this little minx who is accused of literally kicking out the back window of a police cruiser. After getting nabbed for indecent exposure!

exposure of sexual organs and disorderly conduct (flashed her breasts to the public and kicked out a police officers back window after being arrested) pic.twitter.com/SC6dXiujSI

Lest anyone think that it might be somewhat embarrassing to have your mugshot featured so prominently in a public forum—the account currently boasts nearly 200,000 followers—then you’d seriously be underestimating the internet fame-seeking instant gratification times we’re currently living in.

In a recent interview with the NY Post, Josh Jeffery, the 24-year-old electrician who runs the Mugshawtys account, says that most of his content comes from the women themselves, who are often begging to be featured on his feed.

“A lot of people send me their own mugshots—I get probably 15 to 20 plus a day of different ones,” Jeffery told The Post. “A lot of what I post is submissions.”

But for a guy who posts mugshots of hot women on Twitter, Jeffery is perhaps uncharacteristically compassionate towards the subjects he features.

“If there’s anybody that doesn’t want their picture on there, I take it down with no questions asked,” he said, on the rare occasions he posts non-user submitted requests.

“They definitely want some kind of exposure,” he added, of the women who volunteer their own mugshots. Typically the motivation behind these submissions is a Twitter shoutout or crowdfunding request—sometimes, to help them raise bail.

Jeffery also receives no financial compensation for his project. However, he says if he did ever figure out a way to monetize Mugshawtys, he would likely donate to charities that benefit those mixed up in the criminal justice system. What a world!