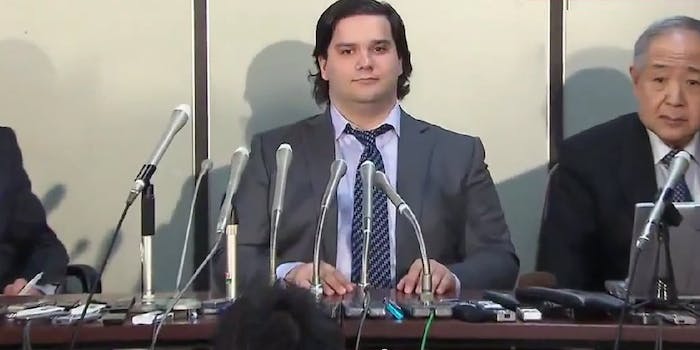 U.S. judge demands deposition be given in Dallas, but may not be able to force Mark Karpeles from Tokyo.

A U.S. judge has ordered the embattled CEO of Mt. Gox to appear on American soil to answer questions related to the firm’s ongoing bankruptcy case. Despite the judge’s wishes, however, her order likely won’t bring the French Bitcoin magnate to the United States.

Mt. Gox’s Mark Karpeles faces intense scrutiny over the collapse of his company, once the world’s leading Bitcoin exchange, which lost more than $300 million worth of its customers’ digital currency before suddenly closing its doors in February.

According to Reuters, Judge Stacey Jernigan ordered Karpeles to appear in Dallas on April 17 at the offices of Baker & McKenzie, the legal firm that’s representing Mt. Gox in its American bankruptcy proceedings. Jernigan wants Karpeles to appear there to give formal deposition in the case.

Mt. Gox is seeking Chapter 15 bankruptcy protection in the United States to protect itself from a fomenting class action lawsuit. Former Mt. Gox customers have filed suit in a Chicago federal court seeking restitution of their share of the roughly 750,000 bitcoins that just went missing. The shuttering of Mt. Gox has been blamed on cyber attacks from hackers, but customers in the class action suit have alleged theft and mismanagement on the part of Karpeles and other insiders at the Tokyo-based firm.

Under Chapter 15, Mt. Gox would not automatically receive protection from its creditors. That is set to be decided at a May 20 hearing. Right now, Mt. Gox is receiving temporary protection until a final decision is made.

Since closing Mt. Gox, Karpeles has remained in Tokyo, where separate Japanese bankruptcy proceedings are also underway. But at a recent bankruptcy hearing in Dallas, a seemingly exasperated Jernigan demanded that Karpeles appear before her.

“If he avails himself of this court, my God, he is going to get himself over here,” the judge said.

Reuters reports that John Mitchell, a Baker & McKenzie attorney, said the company was contemplating replacing Karpeles as the “foreign representative” of Mt. Gox in the case. The judge was not receptive.

Many investors and Bitcoin observers eagerly await testimony from Karpeles, which may answer important questions about what happened to the Bitcoins at Mt. Gox. The total amount that went missing represented about 7 percent of all the Bitcoins in circulation globally.

But despite the court order, legal experts say there are no grounds for extraditing Karpeles to the United States for any sort of civil litigation.

“International extradition treaties only cover criminal offenses, and bankruptcy is a civil matter,” said Michele Martinez Campbell, an associate professor at Vermont Law School who specializes in extradition law. “Therefore, Karpeles cannot be ‘extradited’ in the classic sense, where he is taken into custody and forcibly brought to the U.S. to face trial.”

That being said, Campbell tells the Daily Dot that failure to appear in or abide by the rulings of a bankruptcy court could cause Mt. Gox to forfeit any Chapter 15 protections it hoped to gain by declaring bankruptcy in the United States.

Karpeles has offered to provide deposition from Taiwan.

Though the judge clearly seems bent on forcing Karpeles to testify in the United States, Alice Townes, an attorney with a background in cryptocurrency, isn’t sure the judge can keep Mt. Gox’s attorneys from declaring a new foreign representative to take Karpeles place in the proceedings.