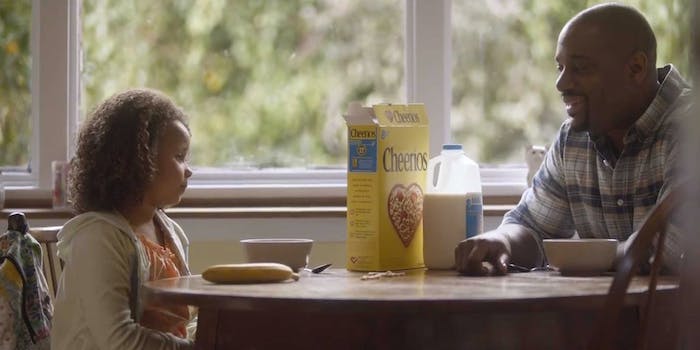 There's no denying the hard liberal slant MSNBC's primetime programming after this tweet.

There’s no denying the hard liberal slant MSNBC’s primetime programming has taken over the years.

Even though Keith Olbermann, the host who began morphing the network’s editorial voice with his scorching screeds against President George W. Bush, is now gone, hosts Rachel Maddow, Chris Matthews, and Chris Hayes make no apparent effort to hide their left-wing bias. The adoption of the progressive Lean Forward tagline several years ago seemed to cement the network’s identity.

But by the network’s own admission, things went a little too far last night with a message from the 24-hour news channel’s official Twitter account that seemed to imply that conservatives are inherently racist. 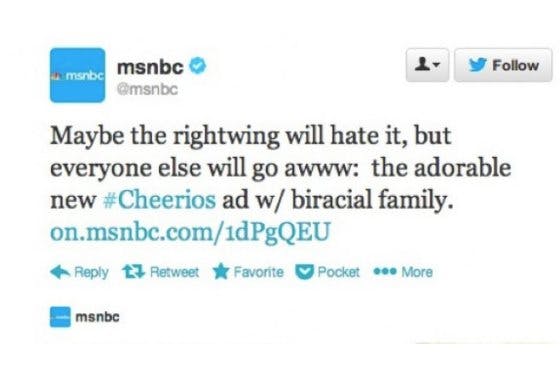 The tweet contained a link to an article about an planned Cheerios Super Bowl ad that will bring back the biracial family that was the subject of some controversy last year when it sparked an ugly racist backlash from some online. The MSNBC story originally included the line, “Forget the Seahawks and the Broncos: there may be an outcry from the right but most viewers are likely to declare this ad the Super Bowl winner.”

The tweet and the line in the article sparked controversy on the right, but not against the ad itself. Many conservatives from biracial families resented the network’s attempt to lump them in with the truly awful people who have criticised the ads. Tweeting with the hashtag, #MyRightWingBiracialFamily, they let their feelings be known.

@msnbc I am a conservative Republican, and here are two of my 6 biracial grandchildren! #myrightwingbiracialfamily pic.twitter.com/ISqu6jNX9Q

So Apparently, #MyRightWingBiracialFamily is a thing now. Thanks, @MSNBC !!! #tcot pic.twitter.com/xJaL3yCqhk

The tweet has since been taken down and the offending line in the article altered. The network issued this apology.

We are deleting the earlier offensive tweet. It does not reflect msnbc’s position and we apologize.

Earlier, this account tweeted an offensive line about the new Cheerios ad. We deeply regret it. It does not reflect the position of msnbc.

This is the second time in recent months that MSNBC has been chastised for making insensitive comments about the racial attitudes of conservatives. Weekend morning host Melissa Harris-Perry issued a heartfelt apology earlier this month for an segment in which panelists on her show poked fun at former GOP presidential nominee Mitt Romney’s adopted black grandson.