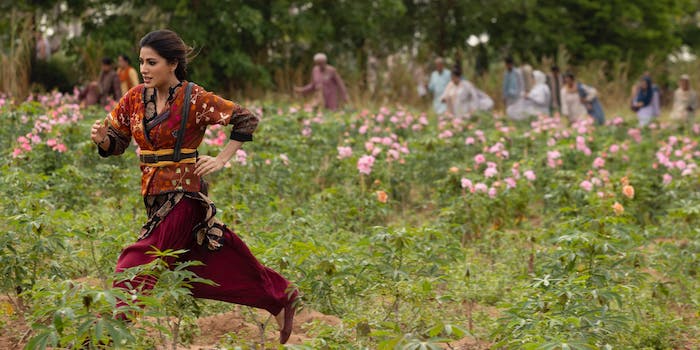 Episode 5 keeps its focus on the emotional core.

We’ve now arrived at the penultimate episode of Ms. Marvel, and like many of the MCU shows that came before it, it serves a couple of purposes. In a more mediocre show (Falcon and the Winter Soldier, Hawkeye, Moon Knight), it’s about the time when the show gets “good,” usually anchored by a powerful lead performance while we get a major revelation about the task at hand. For a show that’s been more consistent across the board (WandaVision, Loki), it adds more depth; the revelations work far better on an emotional level before playing into a familiar Marvel-friendly finale.

Ms. Marvel plays into that fold, and functionally, “Time and Again” is closer in tone and execution to the latter type of Marvel penultimate episode. But Ms. Marvel trusts its audience and story enough that its emotional anchor doesn’t solely rely on its hero; Kamala Khan (Iman Vellani) doesn’t show up until about 19 minutes into the episode, but it never falters.

After a brief newsreel breaking down a more sanitized version of Partition—following Indian independence, the U.K. split India into two countries and deemed Pakistan for Muslims while India would be “a secular state with a Hindu majority”—we’re thrust back to 1942 India, shortly after Kamala’s great-grandmother Aisha (Mehwish Hayat) escapes British forces in episode 3’s cold open with the bangle in tow. In a small village, she comes across a man named Hasan (Fawad Khan), who later offers her food, a place to stay, and recites poetry. One of the stanzas, “What you seek is seeking you,” is the phrase that later appears on the bangle Kamala wields.

It doesn’t take much guesswork to discern what happens next. Over several years, she and Hasan fall in love, get married, and they have Sana. Hasan, perhaps the world’s most understanding husband, doesn’t push Aisha on what she was running away from, but he senses something in her. “[Sana] looks at you as though you’re magic,” he tells Aisha. “I can’t say that I blame her.” Hayat and Khan don’t have much to work with—they have to establish a love story in just a handful of scenes—but both of them are doing exquisite work.

What drives Aisha and Hasan to take the train to Karachi isn’t just the realities of Partition, it’s the sudden reappearance of Najma (Nimra Bucha), who gives her old friend a deadline to return the bangle. Pushing for the move, Aisha insists that Sana needs to be on that train, a point that she reiterates before Najma shows up at the train station; sensing betrayal, Najma stabs Aisha. When Kamala shows up, having traveled to the past at the end of episode 4, Aisha reiterates that Sana—who’s now separated from Hasan—needs to be on the final train of the night and gives Kamala a photo of her family. Like earlier appearances of the train station, the scene is mostly devoid of colorful hues for a more sepia tone, an effect that makes the sequences look murkier.

What happens next with Kamala’s abilities creating the pathway that a much older Sana (Samina Ahmad) remembered following to reunite with her father creates a small (but very important, for Kamala’s family) causal loop: Kamala was always meant to create that pathway. Father and daughter reunite, and Kamala returns to present-day Karachi, where an opening to the Veil presented itself. Fariha (Adaku Ononogbo) attempts to enter it, but doing so kills her and destroys her body. Kamala tries to close it, but she’s only able to do so with Najma, who sacrifices herself. But, in thinking of her son Kamran (Rish Shah) before she dies, she gives him her abilities.

At this point, Muneeba (Zenobia Shroff) and Sana stumble upon Kamala, Kareem (Aramis Knight), and the wreckage of episode 4’s final fight. For someone who said a few scenes earlier that if it was legal, she’d have microchipped Kamala (and even earlier pitied whoever Night Light’s mother was) Muneeba is pretty accepting of her daughter’s abilities, and Sana is given the closure she needed with her mother’s old photograph. Among the funnier sequences in an episode that mostly focuses on the drama, they all bond over photos of Muneeba during her teenage rebellious phase, one in which she ran away at age 17 to follow Bon Jovi (although Sana thinks that it was “Bruce Springfield”).

For the most part, this ties a nice bow to much of the emotional core of Ms. Marvel and even more of the mystical elements. But the final minutes take us back to both Jersey City and the shadow of the MCU as Kamran, now on the run, goes to Bruno (Matt Lintz) after having nowhere else to go. It’s awkward at first—Kamran’s been calling him Brian the entire time, a mistake he only just realized now—but they agree to start over and even find common ground in that neither of their parents is in the picture; Kamran, who doesn’t seem to know that Najma died, believes she’s coming back. One of the Department of Damage Control’s drones spots Kamran through the window, and after blasting it away with the same type of energy that Kamala can control, the drone falls before striking the corner store that Bruno’s nonna owns. But at the moment, Bruno is more shocked that Kamran has powers too.

Ms. Marvel seems to be setting the stage for a typical kind of Marvel finale, one that pits her directly against the DODC. We also know, based on the trailers, that at some point in the finale, Kamala will get her main costume (another MCU series benchmark); she already has the mask and her costume in the last two episodes heavily allude to it. There may be cameos, possibly even set up to lead into Kamala’s appearance in The Marvels, the Captain Marvel sequel that will feature Kamala, Carol Danvers (Brie Larson), and Monica Rambeau (Teyonah Parris).

So far, Ms. Marvel has consistently been one of the stronger MCU shows with its strong ties to family and community being among its strengths. We can only hope that, in next week’s finale, the show doesn’t lose sight of that as it checks those all-too-familiar boxes.