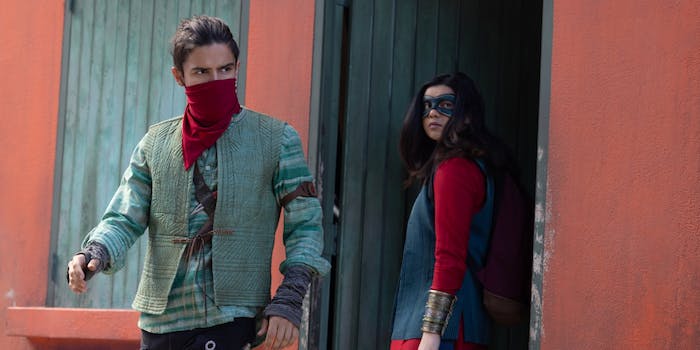 ‘Ms. Marvel’ episode 4 turns a mother-daughter trip on its head

A trip to Karachi offers some answers.

Ms. Marvel is a show that, even with Kamala Khan’s (Iman Vellani) Avengers fangirl inclinations setting the tone in the leadup to her powers unlocking, is deeply rooted in family and community. The Khans are much more than a cookie cutout family who simply exist for Kamala to rebel against—whenever Kamala does, often to protect them, she feels immensely guilty about it afterward—and they’re just as important to her story as Bruno (Matt Lintz) offering her technical support and guidance. While Kamala’s superhero origins may have changed from the comics and are intricately linked to her family’s history, episode 4 only strengthens those ties with a mother-daughter trip to Karachi, Pakistan that uncovers even more of the past and a struggle split across multiple dimensions.

Like many stories with first-generation Americans front and center, Kamala struggles at first. Because of her jeans, she and her family aren’t allowed inside a restaurant. To her cousins Zainab (Vardah Aziz) and Owais (Asfandyar Khan) showing her around the city, she’s an ABCD (American-Born Confused Desi), and when she wants to explore the Karachi train station to uncover the meaning behind her vision from the end of episode 3, they let her go on her own. With Bangkok standing in for Karachi, Oscar-winning director Sharmeen Obaid-Chinoy’s camera work helps to make the city feel alive, and the color bursts through in those scenes.

The train station introduces her to Kareem (Aramis Knight), who was able to track Kamala because of the presence of Noor in her. Like most masked vigilantes, their version of a meet-cute involves tongue-in-cheek snark, a fight complete with knives and energy blasts, and a quick getaway. Kamala isn’t quite convinced that she’s safe from becoming the subject of a true-crime documentary, but Kareem takes her to the headquarters of the Red Daggers, a group dedicated to protecting people from Djinn. In the comics, Kareem is known as the Red Dagger, but here, Red Dagger is more of a bigger organization (giving us an insight into how superheroes and masked heroes work on the other side of the world), which is led by Waleed (Farhan Akhtar).

Waleed is something of an exposition tool, but he offers Kamala plenty of assurance even as he explains how the Clandestines want to break the Veil of Noor that separates our world and theirs with Kamala’s bangle so that the Clandestines’ dimension is all that remains. Kamala, as someone who is genetically linked to the Clandestines’ world while existing in this one, is able to access energy from the other world. “Your humanity links you to the matter of this world,” Waleed tells her. “It makes your abilities unique.”

Sana (Samina Ahmad) is similarly nonplussed about Kamala’s powers, noting that “It’s just genetics.” She just knows that the bangle is important because it saved her life the night that she got on the train to Karachi during Partition and similarly has faith that Kamala will find what she’s looking for; as someone still affected by Partition, Sana is still trying to figure out who she is.

Ms. Marvel is confident enough in its story that even as the show turns toward action sequences, it gives its characters moments of levity and a chance to breathe. Outside of something like Kamala’s love for Carol Danvers, the connections between Ms. Marvel and the rest of the MCU are fleeting. At the Karachi train station, a mural shows Ant-Man (who is popping up a lot throughout the series); in another scene, Waleed mentions Thor as someone who, had he landed in the Himalayas versus New Mexico, would’ve been called a Djinn.

One of the episode’s more affecting scenes doesn’t involve Kamala at all: While Kamala is out with Kareem and his friends, a chance to jam to music as they eat biryani together, Muneeba and Sana speak about just some of the pain surrounding Muneeba’s decision to leave Pakistan for America. Najma (Nimra Bucha) abandoning Kamran (Rish Shah) at the Department of Damage Control’s Supermax prison only drives home the level of hurt that can come with a family betrayal.

Eventually, Kamala’s Jersey City troubles catch up with her as the escaped Clandestines chase after Kamala (now wearing a blue vest Waleed gave to her that invokes her future costume), Kareem, and Waleed across Karachi. (Is it a Marvel project without a car chase?) Waleed dies trying to help Kamala and Kareem get away, but Najma manages to stab the bangle, transporting Kamala back to the last train leaving for Karachi; it’s not immediately clear if she’s physically present or if it’s another vision.

“What you seek is seeking you,” Kamala’s bangle reads, according to Waleed, who notes that the bangle didn’t previously have any kind of inscription on it. The bangle keeps coming back to this particular moment of trauma on a personal and national level, and with only two episodes left, it’s becoming more evident that the answers to Kamala’s questions lay directly in the past.