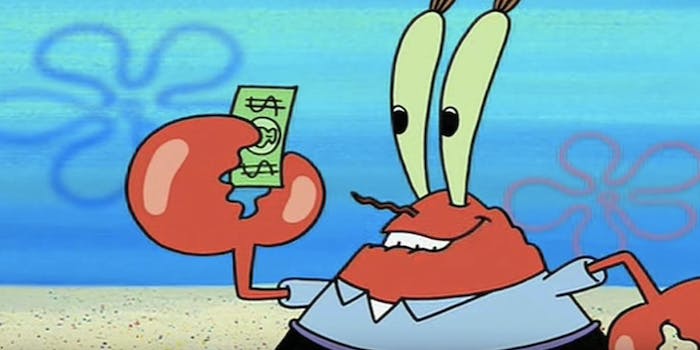 What if Mr. Krabs from ‘SpongeBob SquarePants’ is secretly a Sith Lord?

Welcome to the Dark Side.

For hardcore fans, it’s fun to explore the themes and lore of movies or TV shows by coming up with zany theories that shed different light on these fictional worlds. These are, of course, known as “fan theories,” and as fun as they are, they’re often complete horseshit—but still fun.

Innumerable fan theories about Star Wars are floating around on the Web, and the most interesting of these conspiracies comes courtesy of the cartoon world. When these two things are combined, shit really gets weird. As in, Mr. Krabs from SpongeBob SquarePants is a Sith Lord kind of weird.

As one might imagine, the evidence for this claim offered on sites like Reddit and Tumblr is pretty thin, but there is enough to keep the idea going strong. We can all agree that both Disney and Nickelodeon would be among the first to say this is complete nonsense, but just for shits and giggles, let’s say this theory is absolutely concrete. What would that mean?

It isn’t hard to believe that a crablike creature that walks upright and speaks plain English (or “basic” for you sci-fi nerds out there) could be a thing from the Star Wars universe. Honestly, it kind of looks like he and Darth Maul could be second cousins or something. However, the very first thing that George Lucas established about that universe was that it took place a long time ago, in a galaxy far, far away. It is widely understood that SpongeBob takes place in here on Earth, in our current timeframe.

Nobody actually knows how long “a long time ago” actually was, with estimates ranging wildly from 5 billion years ago to sometime in the 1800s, based on our calendar. Either way, that would mean that Mr. Krabs, or Darth Krab, is super-duper old. But Yoda was something like 800 years old, so again, not totally impossible—though that would really open the door for some absolute craziness in terms of the Star Wars timeline. 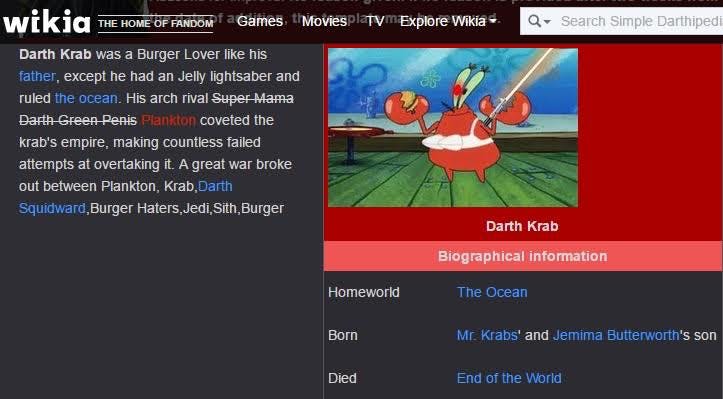 In the SpongeBob universe is where things get really interesting. The show has always made Squidward out to be a crotchety though ultimately good guy, but if Mr. Krabs is really a Sith Lord, Squidward is straight-up as bad as Hayden Christensen’s acting in Attack of the Clones. No two ways about it. He would very likely be the apprentice, much like Vader to Palpatine. Let that soak in for a second, then completely reevaluate your childhood.

Squidward was always sort of borderline however, and much like The Phantom Menace, nobody really likes him. The lovable villain Plankton is a totally different story. Assuming Mr. Krabs is a Sith Lord, and evil by definition, that would mean that the “bad guy” Plankton from SpongeBob would most certainly be good. Perhaps not a Jedi, but he definitely would be Krabs’ counterpoint, so a member of the Light Side of the force. Ever wonder why you thought Plankton wasn’t all that bad? It raises more questions than answers in terms of what the Krabby Patty formula actually is. It couldn’t possibly just be a tasty burger recipe if this is all true.

So where does SpongeBob come into play in this multiverse? The simple answer would be that he’s just an innocent dope caught in the crossfire. Though if Mr. Krabs is a Sith Lord, that would mean he is very likely trying to corrupt SpongeBob and turn him over to the Dark Side. Why else would he keep him so close the years? That would make Krabs would the most powerful and influential man in Bikini Bottom, turning some of the most beloved citizens of the community into agents of destruction.

There is a silver lining. As fanboys and fangirls, it is pretty tough to think about just how far away a galaxy far, far away actually is. So hold onto your butts for this: If Mr. Krabs is a Sith Lord, that would directly connect Earth to the Star Wars universe. Which in turn suggests that Star Wars Episode XII will involve Luke Skywalker’s great-great grandchildren traveling to our planet to fight an insidious ocean army commanded by Emperor Krab. 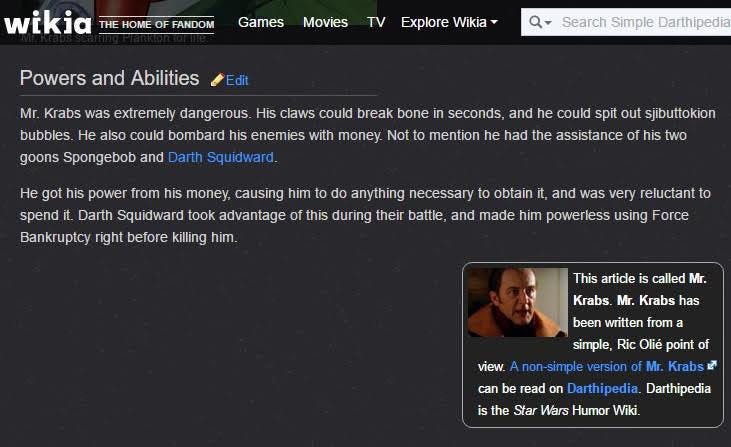 Unfortunately, or fortunately, depending on where you stand on Darth Krabs, this idea doesn’t hold much water. In another world, perhaps, our animators and filmmakers can pull off mindbending crossovers like this—though not in ours. But next time you watch an episode of Spongebob—or Star Wars—it will be impossible not to think about.