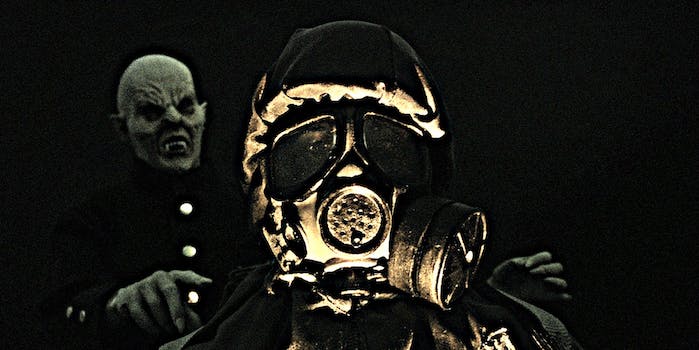 This stinks to high heaven.

For those of you who always wanted to be in the movies, well, now is your chance. At this month’s CinemaCon in Las Vegas, CJ 4Dplex, a company that currently produces a line of interactive movie seats called 4DX, is set to unveil some new intense features. For an extra $8, movie fans can watch their favorite blockbusters in augmented, shaking seats that spray a delicate mist, experience simulated lightning, and even smell your movie.

These new special effects will evolve the cinematic escape to something closer to real life. Now you don’t have to be in front of the camera to be in a movie; instead, the movie will leave the screen and invade your personal space. I don’t know about you, but I’d rather save all this for the amusement park.

The move to incorporate senses beyond sight and sound, however, is part of a larger bid to appeal to younger audiences—as well as the need to simply get people to leave their homes to see a movie. Despite the fact that movies breaking global box office records left and right, North American movie theaters have experienced  a sharp decline in ticket sales. According to the New York Times:

The undiscerning young ticket buyers Hollywood has long counted on to turn out weekend after weekend are suddenly discerning. Or they are at least busying themselves with video games, living room wide-screen televisions, and devices that can pull up thousands of movies with a couple of clicks. For many teenagers, the idea of focusing on a single screen for an extended stretch is anathema.

In addition to the dwindling attention spans of the ever-coveted teen demographic, movies are just too damn accessible now. It used to be you could only see a movie in theaters. But now most Americans can watch anything they can imagine on Netflix, Amazon Instant Video, HBO Now (although, it’s still probably more affordable to get your friend’s boyfriend’s stepdad’s Time Warner password), and even by less legitimate means like torrenting.

But we all know that your sofa doesn’t shake, and while your house may or may not stink, it certainly (hopefully) doesn’t smell like 1970s Manhattan on a hot, humid day.

As more studio money pours into bigger movies with bigger explosions and fewer lines of dialogue, Hollywood suits have to figure out a better way to move butts from one seat to another, so the seat may as well be shaking, stinking, shocking, and spritzing. But that’s always been the battle, hasn’t it? Since Hollywood’s been Hollywood—and even when Hollywood was Vaudeville—the show can only go on if people are there to see it.

4DX promises more than competing companies like DBOX—whose quaint seats merely vibrate—yet their gimmick is slightly reminiscent of the 1960s effort to include scent at movie theaters: Smell-o-Vision. The comparison is inevitable. Smell-o-Vision, like 4DX, was also intended to “heighten the theatrical experience” by pumping smells into the theater at the right moments. This was largely a failure due to technical issues that botched the premiere of the 1960 film Scent of Mystery.

Other directors, like John Waters and Robert Rodriguez, have since made campy homages to the medium. And Terrence Malick was just straight up being weird when he tried to incorporate an “Internet-based fragrance system” with his 2005 colonialist fetish flick, The New World.

More traditional movie theaters, however, still offer some tasteful interactivity that Netflix simply cannot.The Castro Theatre in San Francisco—a single-screen repertory cinema built in 1922—relies on regular sing-alongs to subsidize their niche-oriented calendar. Enthusiastic audiences get to sing to musical classics like Grease, The Sound of Music, and The Little Mermaid, while movie buffs can catch a Jim Jarmusch double feature.

Other popular movie chains entice customers with full food and drink menus. A leader in this game, the Austin, Texas-based chain Alamo Drafthouse combines the luxury of table service with 35mm screenings, niche programming, blockbusters, and irreverent events (not to mention the selling point of their draconian anti-talking policies).

All this is well and good, but it’s unfortunate that a movie alone isn’t enough to get people out of their houses and into a theater. For me, the laptop speakers just aren’t enough—I need to go to the theater. But seats don’t have to move or spritz my face. I prefer to stay dry when I’m inside; in fact, staying dry is one of the defining characteristics of being inside. I don’t need to go and disrupt my personal hierarchy of needs just to feel like I’m walking through fog. I’m an adult, I’ve experienced that. When my brain sees fog, it activates the memory that helps me remember the feeling.

Soon, industry moneybags at the CinemaCon will experience first hand what it’s like to be outside, drive on a bumpy road, and catch hypothermia as 4DX makes the big move to spread to far more theaters in the U.S. When that happens, I’m going to sit it out in a safe, dry theater.