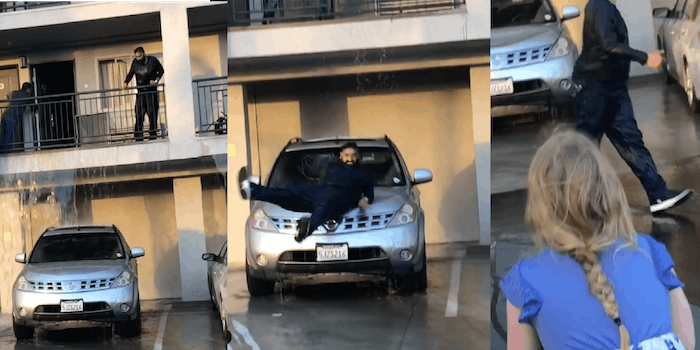 We finally have the story behind that chaotic motel flooding video

If you’ve been on the internet lately, there’s a good chance you have seen the video of the flooded motel and the guy jumping off the banister. Well TMZ finally got in contact with the person filming the video and some motel employees, and they revealed how he caused the $10,000 worth of damages.

In the video, you see the presumed suspect, who is inexplicably soaking wet and disheveled, trying to find a way to escape from his Studio 6 motel room in California.

With screams from random people, a tidal wave of water spilling from the room, and kids crying in the background, the chaotic video ends with the man jumping over the railing and landing on someone’s car. He then slips and falls down the front of the SUV, nearly slamming his head on the pavement.

Prophet Ra Aman, the person who filmed the video, explained that the fire alarm was going on for a while, but the motel staff struggled to get into the presumed suspect’s room because the door was locked. The Los Angeles County Fire and Sheriff’s department rushed over to the scene as it was called in.

TMZ reports that he turned on all the faucets and busted all the pipes in the ceiling. It also reported that neither the motel nor the owner of the Nissan wanted to press charges. The car’s owner says they do have insurance and claimed to have gotten the presumed suspect’s information just in case the case makes it into court.

He reportedly explained to the police that there was no malicious intent behind his actions.