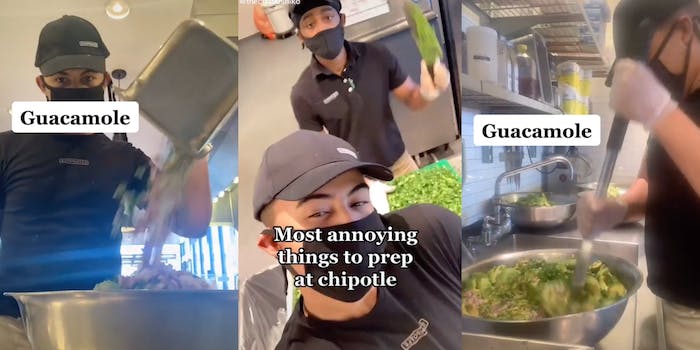 Chipotle worker reveals the ‘most annoying things’ to make on TikTok

Whereas peeking behind the scenes of fast-food restaurants used to be too gross for most people, TikTokers these days just can’t seem to get enough of it.

The videos often serve as exposés on food quality and questionable practices, but sometimes they’re really nothing more than peeling back the veil and revealing how things work at some of our favorite places to eat.

TikToker @thecharlesniko reeled in viewers last week with his behind-the-scenes look at the Chipotle kitchen—and what he claims are the “most annoying things to prep” at the restaurant.

The video first shows Charles-Niko and another employee who he identifies as his fiancé chopping cilantro and lettuce, a messy and time-consuming task even if they weren’t prepping them in bulk.

But dealing with guacamole looks even more obnoxious, as it involves scooping all the pits out of avocados and trying to mix an enormous bowl of guac all at once.

“I used to work there and literally cilantro got everywhere I used to have it around my arms and uniform,” @mylarix wrote.

Several insisted that making chips and salsa is way worse than the menu items Charles-Niko took issue with.

“Tortilla chips and me have a long standing feud,” noted @stephenwephen.

This frustration with certain menu items is far from the only Chipotle-themed TikTok on @thecharlesniko’s page. And to balance this one out, he followed it up with a video of what he calls “the coolest thing to prep at Chipotle”—cheese.

“Prepping cheese soothes me,” he wrote, sharing the massive block that gets cut down and eventually run through a machine to get that familiar shredded Monterey Jack.

“Let’s not talk about having to clean the cheese grater after,” one employee chimed in.