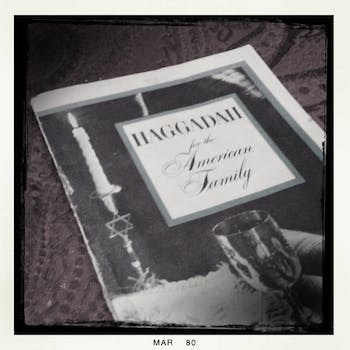 How Moses is like Justin Timberlake, according to JDate

JDate updates the Haggadah, an important Jewish text, with modern references and a dating profile for Moses.

JDate is looking to bring a holiday thousands of years old into the 21st Century.

In honor of Passover, the Jewish dating site has released an updated and modernized version of the Haggadah, the Hebrew text used during Seder.

JDate’s Haggadah keeps all of the traditional prayers and recitations and complements them with examples of modernity and references to pop culture. From the section entitled “Story of Passover”:

“So, just as Timberlake returned to music, Moses returned to Egypt and went to see Pharaoh with his brother Aaron (like Timberlake with Jay-Z),” reads the section entitled “Story of Passover,” a clear reference to JT’s killer jam “Suit & Tie.”

Moses— or GunsNMoses— describes himself as a “wandering, free-thinking type.” He admits to coming from money but points out that he gave that up to “meet someone who is down to fight for freedom.” In other words, he’s the biblical version of a trustafarian who thinks he can change the world.

As per what type of girl the savior of the Jewish people is into, Moses says that he’s “looking for a girl who plays the timbrel” because his sister Miriam says that “percussionists always hit the right note when it comes to relationships.”

Other notable characters getting profiles are the Pharaoh, his queen, and the brutal slave master.

You can download JDate’s Haggadah via their site. It is currently available for Kindle, iDevices, and in PDF format.