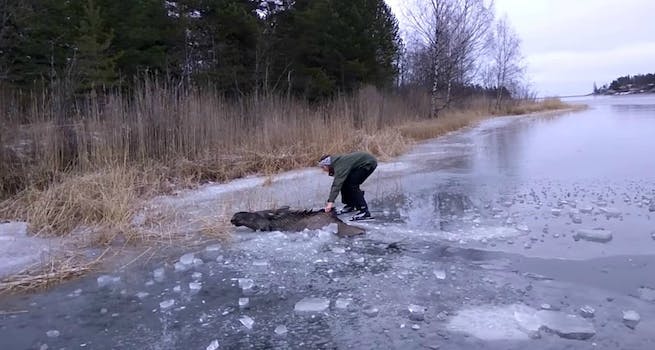 We’ve all been there before: You’re ice skating on a lake in Sweden, and you come across a moose that’s stuck in the freezing water. What do you do? Try to rescue the flailing, yet still dangerous creature? Take advantage of the situation and try to ride it? Say a prayer for the beast and call it a day?

For one group of good Samaritans, the answer apparently was to put themselves in danger to help the moose make an escape from its watery grave.

Watch the harrowing rescue attempt as the moose seems to be fading fast.

On the Reddit thread that found the video, commenters wondered how the moose could protect itself from hypothermia after escaping the water and they ripped the creature for not turning around after it made its way to land to give a nod of gratitude to its saviors.

But redditor Coedweg made this handy translation chart to give us a better glimpse into the minds of those who were rescuing the moose.

While we applaud the bravery of those who helped keep the moose alive, here’s a reminder that moose usually don’t want to be fucked with. So unless its life is in danger (and you aren’t putting your own personal safety at risk), it’s probably better just to leave the wild animal alone. But if the moose is in grave danger, make sure you grab an ax, hit the record button on your phone, and get to work being a hero.