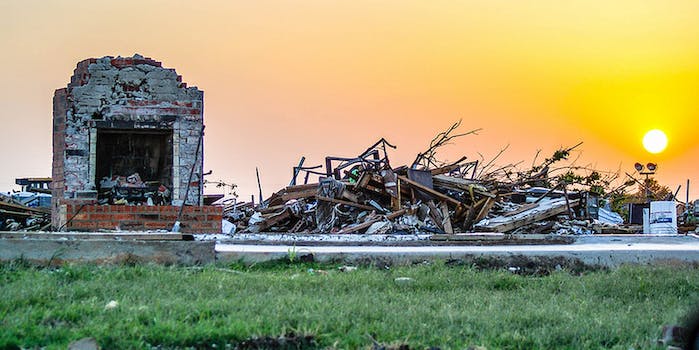 After tragedy struck in the form of a tornado, locals were in no mood for this nonsense.

Schadenfreude is never as enjoyable as when it comes at the expense of the maniacally homophobic and theologically confused protest cult known as the Westboro Baptist Church. Which is why you’ll love this footage of folks in Moore, Okla., chasing them out of town.

Naturally, the WBC—which showed up to say the deadly tornado was just a taste of divine wrath—tried to play the victim to the rowdy counter-protest. This profusion of “rebel thugs,” they claimed, are the reason god hates Oklahoma. Maybe that’s also why the Sooners got knocked out in the first round of March Madness? Lord, what terrible retribution He hath wrought!

But the strongest persecution complex on the planet isn’t enough to mask the truth of this encounter: nobody was arrested or injured, there was no outbreak of violence, and the few WBC protesters present were forced to flee defeated and broken.