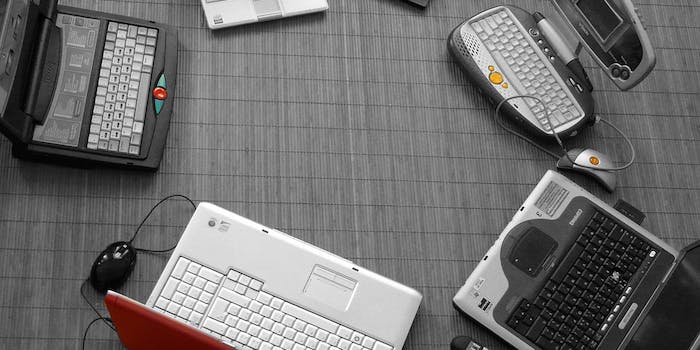 Why MOOCs won’t save our education system

Massive open online courses have been touted as the future of education, but the concept isn't as revolutionary as it appears.

Want to live a great life?

Work really hard in grade school, so you can get into a very good and very expensive college. Work extremely hard in college, so you can get a great job when you graduate.  Then, use that job to pay off the sizable debt you acquired to pay for college. If you’re really ambitious, go into more debt—a lot more—to get a graduate degree in your chosen field, on the gamble that it will be a worthwhile investment in a future career.

There is something fundamentally unsettling about a society whose clichéd path to success involves starting life in debt.

This is the sentiment that has been repeated ad nauseam by those who support MOOCs (massive open online courses): free, high-quality, online courses open to the masses, held by professors at some of the world’s best universities. How revolutionary! Now the general public has access to high-quality education for free!

Except it isn’t revolutionary at all. In fact, MOOCs change nothing. 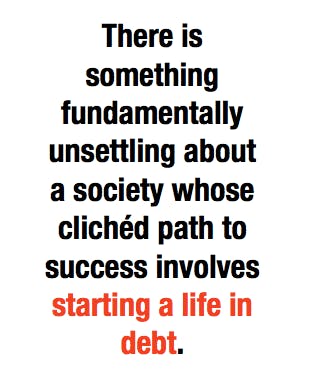 The general public has had access to free public libraries in the U.S. since the days of Benjamin Franklin. The few hundred courses provided through a MOOC provider like Coursera are tawdry in comparison to the ocean of free, high-quality information available in general via mainstream resources. Without enrolling in a course or investing in an hour-long lecture, today it’s easy to get the gist of pretty much any concept, person, or event via sites like Wikipedia; review summaries and demonstrations on platforms like YouTube; reference scientific studies and carefully composed research through directories like PubMed and Google Scholar; and review detailed economic, sociological, and political data through resources like the United Nations’ Population Division, the OECD, and the Heritage Foundation’s Index of Economic Freedom.

So why all the hubbub around the existence of these new MOOCs?

The reason is simple and tied to our perception of what makes elite education worthwhile to begin with. The first widely covered MOOCs were connected to prestigious universities and aped their practices (the visual spoken lecture format). Want to see what it’s like to attend an Ivy league school—or better yet, want to take a class at an Ivy league school? Now you finally can, while sitting in your PJs at home, on your couch.

Traditional MOOCs intrinsically can’t upset the traditional prestige paradigm because the paradigm lies at the cornerstone of their relevance and hype. Instead of challenging the status quo by saying that prestigious degrees don’t matter, or by imparting practical skills, most MOOCs have chosen to revolve around relatively abstract academic subjects and gain traction on the coattails of prestigious course providers such as Stanford University, Yale, and Princeton. Abstract knowledge learned from online courses may lead to a more intellectually stimulating life, but its merit is mostly ephemeral in nature—especially when it comes to getting a job.

If we agree that it is not acceptable for most people to start their professional lives laden with debt, we need to approach the problem at its core. Why is it that people go to college? And what does college really offer?

Very practically speaking, college offers a socially accepted and acknowledged transition point from childhood into adulthood, the opportunity to meet new people and develop a close-knit professional network, a place where researchers have access to the tools/funding/community they need to perform said research, and a somewhat-functional vetting mechanism for employers. If this is what you are looking for, college is the appropriate place for you. MOOCs will not replace any of those services soon. 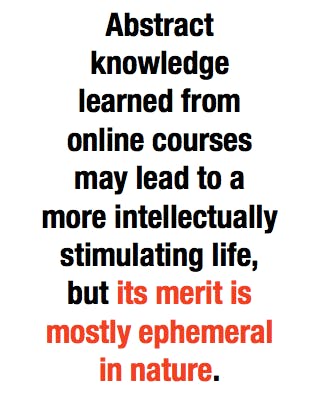 However, those practical benefits are not what  motivates most people to attend higher educational institutions. Most people go to college because they want to learn, then obtain an assured “good” job that can grant them financial security. But college doesn’t offer jobs, nor does it offer training one could not glean from books and the iIternet (except in the most technical of fields). Furthermore, college does not provide truly relevant real-world experience. One of the single greatest problems with our economy and education system is that we view college as a path toward financial security. Somehow, college has become the go-to place to learn how to make money, manage money, and get hired.

MOOCs sought to solve this problem by making the functional aspects of what happens at a college free by putting publicly available video lectures online. Then they recreated colleges’ archaic test-based vetting system for course completion in the online environment, giving courses quizzes, homework assignments, and final exams. Yet the truth is, almost all the information taught at colleges had been available for free online long before MOOCs hit the scene. Moreover, many of the courses MOOCs offered—like Coursera’s courses in “Canine Theriogenology for Dog Enthusiasts” and “Dinosaur Paleobiology” and Udacity’s introduction to psychology and physics)—are not likely to make students concretely more hireable (though they are most certainly intellectually stimulating). Look at any major MOOC course-listing page as an example: Will this make students concretely more hireable?

Worse still was the video format of lectures MOOCs adopted, which is still heavily used. Video was chosen precisely so that our lecture-based learning system could be maintained. This system was not maintained for efficiency, but because of the prestige it carries: watching a famous professor gesticulate emphatically from a podium, preach from the pulpit. Video lectures allow one to say they experienced a semblance of what a real-life Stanford student might have while sitting in a live class.

The truth is, lectures are a horrible form of conveying information for many disciplines, especially those which do not lend themselves to narrative storytelling. They aren’t searchable, they aren’t scannable, they aren’t browsable, they aren’t engaging, and they invite multitasking. The Internet has introduced new methods of conveying information that have proven superior in virtually every sense, specifically the highly modularized, sub-headered, and interconnected Web of articles used throughout addictive learning centers like Wikipedia, TV Tropes, etc.

For a MOOC-like organization to actually alleviate inefficiencies in our educational system, it must dissociate itself from the idea of making college free and instead solve the root problem: a need for low-cost learning that translates to employment. To actually act as viable alternatives to traditional educational institutions, MOOCs need to circumvent the already inundated old-school, corporate career paths and concretely introduce people to immediately relevant tools, jobs, and money.

To make an impact, MOOCs must train people for careers that don’t require the possession of prestigious, formal degrees. Codecademy, for example, exclusively teaches programing and does this very well. By demonstrating retention of skills taught to you through Codecademy, you can legitimately increase your employability. (Udacity and Udemy have also leaned towards this path.) 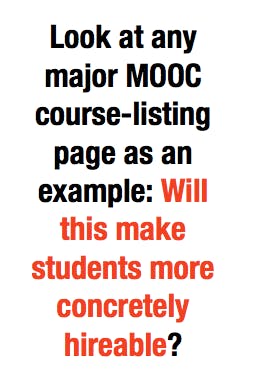 MOOCs must also train people for new types of jobs that revolve around an individual’s competence, work ethic, and ambition, as opposed to pedigree. Thanks to the Internet, such careers are copious and real.

I recently launched a beta site for another MOOC-like alternative called Gigaverse. It’s designed not to teach new talents, but to translate individuals’ existing talents and hobbies into careers—or at least sources of supplementary income. Gigaverse was founded with the belief that the missing piece in our educational system is not a lack of open and high-quality training resources, but rather the paucity of information on using readily available resources to help oneself (whether that involves getting a job with a company or starting one’s own).

The potential is vast, but it won’t be realized until MOOCs abandon their attachment to antiquated paradigms such as lectures and brand name universities. To enjoy a more accurate peek at the future of education, look for resources like Codecademy and Gigaverse that revolve around immediately applicable, concrete skills and provide information in a compelling, convenient, bite-sized, and Web-friendly format. By leveraging gaming mechanics, modularized, easy-to-skip-around guides, and student response systems that adjust to each learner’s unique needs, sites with a practical focus can and will revolutionize the way we approach higher education, careers, and employment.

Malcolm Collins is the founder of Gigaverse, an online learning resource that shows people how to translate their talents into income. A grad student at the Stanford Graduate School of Business, Malcolm has a professional background in neuroscience with specialization in schizophrenia and brain-computer interface. In his spare time, Malcolm hangs out online, plays PC games, reads fanfiction, listens to lectures on tape, and writes on the subject of online cultures. He is known for his ultra-nerd exploits such as his Reddit marriage proposal.