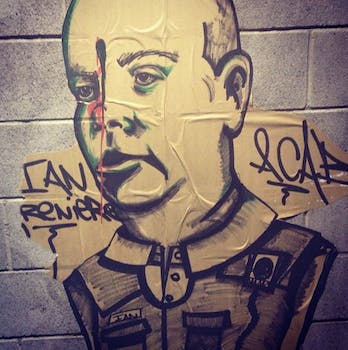 A Montreal woman is accused of criminal harassment after Instagramming a piece of anti-police graffiti.

Lafrenière heads the communications division and often appeared in the media during student protests. Pawluck, 20, claims she didn’t know who he was and simply found the graffiti interesting.

“Many of my friends do not like the police,” Pawluck told the Huffington Post. “I thought it would be funny to put the picture on Instagram. I do not even know who he is, Ian Lafrenière.”

Pawluck, who describes herself an activist and has several Instagram photos tagged #fuckthepolice, was arrested Wednesday. She was released several hours later on a promise to appear in court on April 17. She has not been formally charged.

There may be more to the story than is being revealed at this time, however. A spokesman said police concern went beyond simply sharing the photo, but would not reveal those mitigating circumstances due to an ongoing investigation.

Pawluck was previously detained during mass arrests at student demonstrations and has instagrammed at least two fine notices. Over the past year, students have frequently taken to the streets of Montreal to protest rising tuition fees.

Pawluck is banned from going within a kilometer of police force headquarters or Lafrenière’s home. She claimed to have done nothing wrong and accused police of harassment, according to CBC.