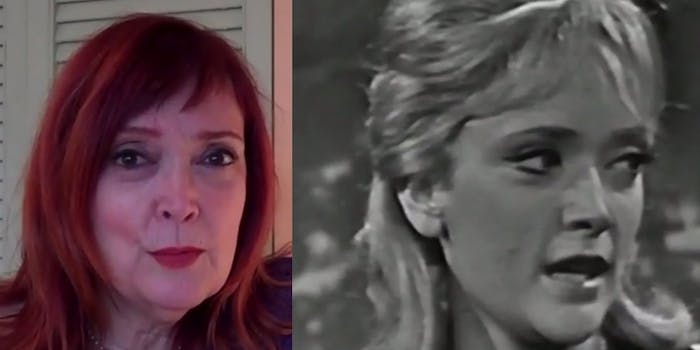 The Internet played a part in her firing, but the power of social media may have helped get her job back.

Ironically, the Internet was the reason drama teacher Jacqueline Laurent-Auger lost her job to begin with.

As reported by Radio Canada, Laurent-Auger said in a letter it was the discovery of her IMDb biography, which she claimed she didn’t even know existed, that led to her students stumbling over her decades-old nude images.

Despite Laurent-Auger’s positive history as a teacher, the school felt the recent revelations about Laurent-Auger’s former career exploits made it impossible for her to continue teaching. In an interview with Radio Canada, the school’s director Michel April described her film history as an “element of distraction” that would make it difficult for her to “control her classroom.” His remarks angered many Quebec citizens who felt that the school’s decision was akin to slut-shaming.

“I have always had positive feedback from parents and students,” Laurent-Auger wrote in the letter protesting her firing, noting that her body of work was part of the moral emancipation of the ’70s.

Laurent-Auger also told the Globe and Mail that the films were not explicit.

The school evidently disagreed, however. After news of the firing went viral in Quebec last week, Brébeuf released a statement in which it blamed Laurent-Auger and the Internet equally.

After sustained backlash against the school over the past week, including from former students who came to Laurent-Auger’s defense, the opinion of the school seems to have changed. In a statement issued Tuesday, the school acknowledged that “the whole issue could have been handled differently,” and said that it had initiated a discussion with Laurent-Auger to “return in new roles to the Brébeuf community.”

The school has also pledged to host a public discussion within its community on “sexuality, digital platforms and social networks in educational settings.” In a statement, the school said: This exercise is part of the role that the College has played in education in Quebec and is part of a public debate that clearly needs to be had… College management wants Ms. Laurent-Auger to have a stake in this debate, if desired.”

Canadian Twitter promptly welcomed the news, with many continuing to laud Laurent-Auger’s handling of the issue in the face of the publicity.

Brebeuf should take lessons from Jacqueline Laurent-Auger on how to handle things thoughtfully, with poise and professionalism. #HerNewJob

Hopefully she’ll soon be able to teach her new students how to maintain both.