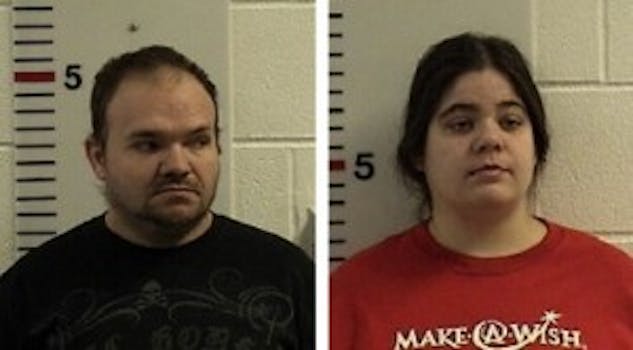 A concerned family member posted the videos to YouTube and Facebook to get the attention of the District Attorney's office.

In a horrifying video that’s sparked outrage in Oklahoma, Arkansas, and beyond, 26-year-old mom Christina Marie Hawkins of Arkoma is seen repeatedly hitting her small daughter in the stomach, then hurling the screaming girl across the room.

Now, Hawkins, who is free on $20,000 bond is claiming that she was in the middle of a mental breakdown when that video was shot. Charged with felony child abuse, she told 40/29 News, ”Yeah, it looks like that’s what happened in the video but that’s not what actually happened, I would never abuse my kids like they’re saying I am…I’ve never hit them like that, I’ve never left any bruises on my children at all.”

She also said that it’s hard not having her girls around, and that she finds herself crying at night.

The man who recorded the video is also facing charges, of obstruction and enabling child abuse. Rickey Leon Griffith, 36, allegedly recorded the video months ago but did not report it to police. Family member Randall Chaney told KFOR News that after he got his hands on the video, he took it to police, but, he says, they were not interested. So, Chaney did the only thing he could think of: He posted the video on Facebook and YouTube. After it started making the rounds, Chaney took it to the District Attorney’s office, and this time, he says they paid attention.

Hawkins has pleaded not guilty and is due in court on March 12. Griffith will appear on March 6.

The Torment and Tragedy of 10-Year-Old Jonathan James

Photo of Griffith and Hawkins via CrimeLibrary